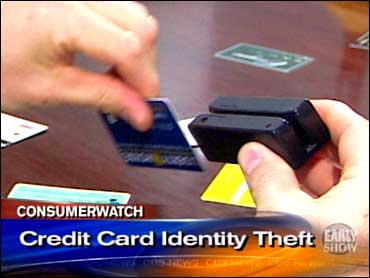 Most people would never hand over their credit cards to strangers, but many do every time they eat at a restaurant when they pay for their meal.

In New York City, investigators arrested 13 people accused of preying on unsuspecting patrons at restaurants in at least five states. They are expected to be arraigned Monday.

When customers paid by credit card, the crooks skimmed their information using devices so small, they can fit in a pocket.

"They take it out and they skim your card," The Early Show financial correspondent Susan Koeppen said. "And then they move on and they actually do your transaction. That little device can hold hundreds of credit card information. Then they sell that information. They make counterfeit cards and then they go on shopping sprees."

The people who were just arrested are accused of making counterfeit cards and racking up more than $3 million in fraudulent charges.

Sean Steele recently fell victim to skimming at a restaurant in Washington, D.C.

"You sort of just trust or trusted a waiter or server to run the transaction and bring my card back," he said.

Now some restaurants are taking action to combat the problem. Hooters, for example, is testing portable devices that will allow patrons to pay their tabs right at the table, so their credit cards never leave their sight. It's an effort to make things more convenient for customers and to crack down on fraud.

But this kind of theft isn't limited to restaurants. The No. 2 location is gas stations and it can also happen at ATM machines. It even happened to Koeppen.

Koeppen has some tips for avoiding being skimmed: