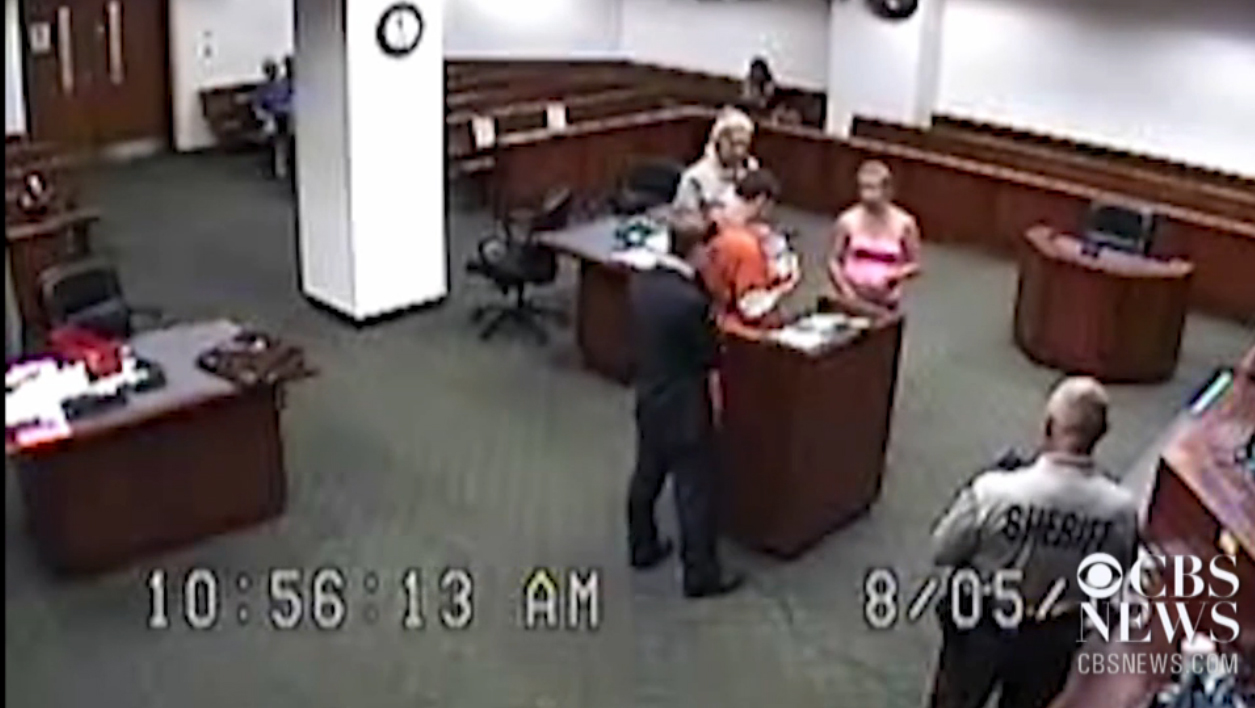 LOUISVILLE, Ky. -- A Kentucky judge was a part of an emotional courtroom scene last week when she allowed a burglary suspect to meet his newborn son for the first time as she looked on from the bench.

Judge Amber Wolf had previously issued a no-contact order between James Roeder and his wife Ashley, who are co-defendants in a Jefferson County burglary case, reports CBS affiliate WKYT. But she made a special exception to the order after Ashley Roeder gave birth as the case against the couple was still pending.

On Friday, when both husband and wife were scheduled for back-to-back hearings, Wolf asked Ashley Roeder if she would allow her husband to come into the courtroom to meet the infant, who was with her.

"She called my attorney up to the bench and whispered something to him, and he came to me and said, would you have any objections to James seeing his son, and I said absolutely not," Ashley Roeder told the station.

In courtroom video, Wolf asks Ashely Roeder, "You're sure you're comfortable with this? Is this what you want to do?" before calling her husband into court.

Wolf made it clear that she wasn't suspending the no-contact order, but rather making a one-time exception so James Roeder could meet his son before being transferred to Todd County. Roeder also faces charges in the southern Kentucky county, reports CBS affiliate WLKY.

"I'm making a temporary exception right now, in front of me, on the record, so you can meet this baby," Wolf says. "This is your son."

Ashley Roeder gives her husband the baby, and James Roeder is seen holding and kissing the infant. He, his wife and Wolf all apparently tear up during the emotional introduction.

"Thank you for letting me be a part of that," Wolf tells Ashley Roeder after her husband was escorted outside. "....Congratulations again."

Wolf later said when she heard James Roeder had not yet seen the one-month-old child, she saw an opportunity to make that happen and she didn't want to pass on it, reports WKYT.

After both Roeders left court, Wolf is heard telling staff, "If y'all aren't teared up, you're just heartless."

It's not the first time Wolf's compassion in the courtroom has drawn the national spotlight. She made headlines last week when she became furious that jail staff apparently hadn't given pants to a woman who appeared in her courtroom. Wolf phoned jail officials during the hearing and demanded an explanation.