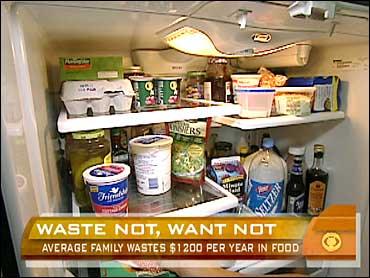 Every week in homes across America, food is being tossed in the trash.

Some has gone bad, but plenty is perfectly fine.

With food prices rising fast, now's a good time to heed ways to cut back on waste.

The average American family wastes $1,200 in food each year, says Timothy Jones, who's been studying food waste for almost two decades. Each household throws out about 500 pounds of food annually, and 15 percent of it is still in its original packaging, and still within the dates on the packaging showing how long it's good for.

"We need to think about our food consumption so we lower our loss rates and still consume the amounts we need," Jones points out.

Lori Johnston, a mom to three growing teens in Monroe Township, N.J., told Koeppen they all have completely different ideas of what to eat, which means having enough food on hand to make sure everyone gets what they want. But that means not everything gets eaten, and plenty ends up in the trash.

Also, says Johnston, "I am throwing out so much stuff because now, with the price of gas, I am buying double the stuff so I don't have to go to the store."

And lately, in an effort to save money, Johnston's been buying in bulk from warehouse stores, and admits to buying food she doesn't really need just because she has a coupon.

So lots is going bad before anyone eats it -- fruits, veggies and meats that look it, and packaged items past their "good until" dates -- and being thrown out.

Johnston says she encourages her kids to eat the food that's about to go bad, and is trying to cut down on how much they waste.

Jones advises that you avoid buying in bulk, especially fruits and veggies, which can go bad quickly. And try shopping on a Thursday -- that way, you'll know if your family is going to be around to eat during the weekend. And, he adds, people get tired during the week and don't feel like making fresh meals -- one reason things go bad.

More tips: arrange food by date in frig, just like supermarkets do -- the oldest up front, the newer stuff toward the back -- so family members will grab the older ones first, before they go bad. And -- brown-bag it more -- so you're always looking for foods to bring.