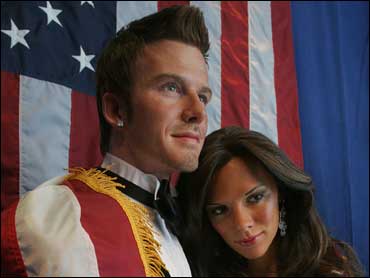 Madonna, Tom Cruise, Samuel L. Jackson and Angelina Jolie have arrived in the nation's capital, where they'll be among the stars of a big new attraction. One snag -- they aren't wearing any clothes.

Dozens of naked bodies -- all made of wax and fiberglass -- lined the walls of a studio at the newest Madame Tussauds wax museum as workers prepare for its opening next month. Cruise was only recognizable by a label on his bare shoulder -- his head was still in a box -- but designers promised to give him a dashing wardrobe soon.

"We fast-tracked all these figures to have them ready for the opening," said Janine DiGioacchino, general manager for Madame Tussauds in New York and Washington. "Our studio team of 35 sculptors are working 24 hours
around the clock to get them done."

The entertainment group's seventh wax museum -- its third in the United States after New York and Las Vegas -- is starting to take shape in the lower level of a historic downtown department store building. An opening gala is set for Oct. 4, and the museum opens to the public Oct. 5.

A shipment of 51 figures arrived at the museum this week after months of research and meticulous design at Tussauds' London headquarters. Many figures, such as Thomas Jefferson and Johnny Depp, have full heads of human hair, inserted strand-by-strand into the wax sculpture.

"We had to bone up on our American history. We want the figures to be spot on," said Lisa Partridge, a hair color artist and 15-year veteran of Tussauds. "Jefferson had freckles. He was quite a red head. Not many people knew that."

The sculptures require touchups every day, after visitors feel the hair or get even more intimate.

"Sometimes we have to remove lipstick marks from some of the more popular figures," Partridge said. "The George Clooneys get a lot of attention from women who touch them and kiss them."

The four-term mayor, famous for being caught on videotape at a downtown hotel smoking crack cocaine in an FBI sting, did a sitting for museum artists over the summer. Contrary to early talk, Barry won't be placed in the museum's "scandal room" with the likes of Hoover and President Richard Nixon. Instead he'll join George Washington in one of the first rooms, known as the "Spirit of Washington."

"I'd not heard of (Barry) before, but he seems to love the limelight," said sculptor Dave Burks, who took nearly 200 measurements of Barry's head to design his figure. "He seemed to really enjoy it."

Like so many attractions in Washington, politics and history are at the museum's core. Abraham Lincoln greets visitors at the entrance -- just a block from where he was fatally shot at Ford's Theater. From there, guests will pay the approximately $25 admission to see more.

Each figure has a caption with a quote from the subject, some fun facts and the essential thing to know about that person.

"It's not like we're a museum in the fact that we're worthy and there's loads of stuff to get through," said Creative Director Paul Williams. "It's more like we're entertaining people, and we're giving them the facts, the fun stuff they can take back and say, 'Hey did you know this?' "

Interactive features in each gallery quiz visitors along the way. The "scandal room" has some tough questions about Watergate on a replica of Woodward's desk, such as how many burglars robbed the Democratic National Committee headquarters. But while Woodward got the star treatment, his reporting partner Carl Bernstein will have to wait. Bernstein is on the short list for future additions to the museum, DiGioacchino said.

A "war room" showcases presidents during wartime, such as Truman, with his speech on dropping the atomic bomb; Dwight Eisenhower, in full military uniform; and Franklin D. Roosevelt and Winston Churchill, with a phone between them that carries snippets of their famous words.

But the museum isn't all serious.

One room has all the trappings of an exclusive nightclub. It's filled with celebrities, such as Julia Roberts, George Clooney and Will Smith. Beyonce Knowles is center stage with three of her music videos playing in the background.

Bill and Hillary Clinton also make a comeback, though in separate rooms. The former first lady is grouped with the current affairs figures, while the former president is holding down the Oval Office. There's also a mention of the Monica Lewinsky affair on file in the "scandal room" for anyone who doesn't know the details.

As visitors leave, Katie Couric interviews passers-by about their favorite moments and who they'd like to see in the galleries -- feedback the museum intends to use for the future.