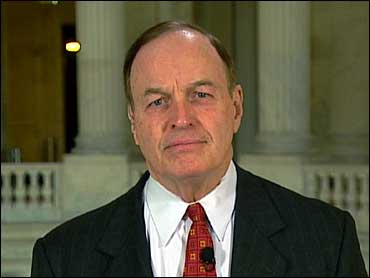 (CBS)
Sen. Richard Shelby, R-Ala., told Bob Schieffer on CBSNews.com's new Web program "Washington Unplugged" that he hopes Republican senators can band together on the economic stimulus package to be presented to the Senate next week.

"I hope Bob that the Republicans can stay together. I haven't done a vote count but if we stay together they won't pass that bill," Mr. Shelby said point blank. Though he is "doubtful" they his colleagues will completely unify.

"I think there will be some Republicans that will jump on the bandwagon and jump ship," said Shelby, who is ranking member of the Senate Committee for Banking, Housing, and Urban Affairs, adding "but I think it's a bad piece of legislation."

Schieffer asked if the bill could pass in the Senate, as it did in the House, without any Republican support to which Shelby exclaimed, "absolutely, not."

"We could keep talking about it. If the Republicans band together, there are forty one of us this bill won't pass."

"I don't know where the money comes from...we ought to get the private sector involved," he admitted.

Asked what changes Democrats and the White House must make to the bill passed Wednesday by the House, will no Republican support, Shelby was explicit: "we would have to basically scuttle it. Do a one hundred and eighty degree turn."

"We ought to attack the banking crisis first," Senator Shelby explained and he admitted that he told President Obama "you have your priorities wrong."

The key senator called the package "a political statement," well, "at least three forths of it."

"Its bad. Its going to get worse and if we look at the history of stimulus packages all the way to the thirties," the senator told President Obama, "they are checkered at best."

"We've got to attack the portfolios of these banking institutions," he said. "Our banks are loaded with toxic assets." "They don't know what is in their portfolios."

The hard-hitting, politics-centered show will appear every Friday and showcase CBS News' brightest commentators and correspondents. The fifteen-minute program will feature straight talk from a newsmaker, a discussion of the week in politics, and in depth analysis of issues affecting the new administration. The show will air on CBSNews.com and its content partner Politico.com.

You can watch it below: