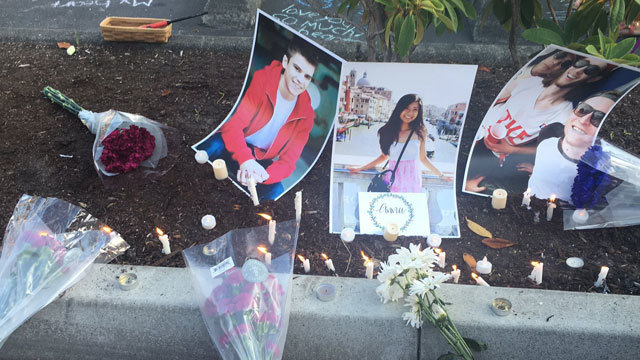 SEATTLE -- A 19-year-old man who shot and killed three teens Saturday at a party in suburban Seattle was so unfamiliar with his newly purchased AR-15 semi-automatic rifle that he parked his car across the street and read the firearm's instruction manual just before the attack, police wrote in a probable-cause statement made public Monday.

Allen C. Ivanov was arrested by state troopers on Interstate 5 more than 100 miles from the bloody scene in Mukilteo, a north Seattle suburb, authorities said.

They said he confessed to the killings and that he did it because he was angry that his ex-girlfriend, Anna Bui, seemed to be moving on with her life after their recent breakup. The two were both students at the University of Washington, reports CBS affiliate KIRO.

Bui was one of the victims. According to the documents, Ivanov referred to her as his "dream girl" and the first girl he had ever kissed.

Ivanov, 19, told police he had dated Bui for about a year and a half but broke off the relationship about two months ago because he needed time to work on himself, the documents say. After the breakup, Ivanov said he received "hurtful" Snapchat messages from Bui indicating that she was getting on with her life without him, which made him jealous, the documents said.

The documents also indicate that Ivanov gave a few indications of his troubling intent: He texted someone last week in Tennessee "regarding committing a mass shooting;" he posted on Twitter, "What's Ruger gonna think" - an apparent reference to the manufacturer of his rifle; and that he told his supervisor at an electronics store on Friday that the previous night he had put the rifle in the trunk of his car and gone to a quiet spot and just sat.

Convicted killer: "I did not kill Samira Watkins"

Ivanov was also ordered not to have any contact with the families of the victims.

Ivanov had bought the assault-style weapon about a week before the attack, saying he planned to use it for target practice and that he had signed up for a gun-safety class this month, Mukilteo Police Detective John Ernst wrote in the probable-cause statement. Ivanov allegedly admitted to the detective that to him, the rifle was a "symbol of power."

"Ivanov stated that he showed up to the homicide scene at approximately 2200 hours, and parked across the street and watched," Ernst wrote. "He said that he creeped up toward the house and saw [Bui] with another male and got angry. He said that he returned to his car, read the instruction manual for the rifle, loaded the magazine, placed the magazine in the rifle, and sent the rifle's selector switch to 'safe.' He then returned to the victim house property."

Ivanov told detectives he creeped around the back of the house and hid near the living room windows, where he was eventually discovered by one of the young men attending the party.

"The male said, 'No, no no,'" Ernst wrote. "Ivanov stated that he was 'scared,' he flipped the selector switch to fire and shot the male. He stated that at that point it was too late to turn back, and once he had pulled the trigger his adrenaline kicked in."

Ivanov said he entered the house through a side door, found Bui and shot her twice, then continued through the house, saw through the front door another man running toward the house and shot him, according to the probable-cause statement. From a balcony off the master bedroom, he said, he shot at two more men in the driveway before going onto the roof, realizing his magazine was empty and fleeing.

In addition to Bui, of Everett, Jordan Ebner, of Lake Stevens, and Jacob Long, of Everett, were killed. They were all 19 and recent graduates of Kamiak High School in Mukilteo, a waterfront city of 21,000 people.

A fourth person, 18-year-old Will Kramer, was wounded and remained in serious condition Monday at Harborview Medical Center in Seattle.

"She was hiding in the closet and called me from the closet while it was going on," Susan Gemmer said of her 18-year-old granddaughter, Alexis, who was at the party but unharmed. "We were texting back and forth, telling her to stay quiet, stay calm, we're on our way. She kept saying, 'They're dead, they're dead, I saw them, I was right there and I saw them.' "

Gemmer said that according to her granddaughter, about 15-20 people had gathered at the home in the affluent neighborhood for the party, mostly between 18 and 20 years old.

Hundreds gathered at a vigil Sunday to remember the victims, reports KIRO.

"It's still processing for me that it's actually happened here," friend Emily Linh told the station.

Ivanov's attorney Tim Leary questioned why it's legal for a depressed 19-year-old to buy a semi-automatic rifle, especially given research that shows the brains of young adults continue to develop into their 20s.

"If he would have walked into a 7-Eleven and tried to buy a six-pack of beer, he would have been turned away," Leary said. "When you look at someone who's 19, what they can and can't do is very troubling, and the consequences of that could not be any greater for the victims, for my client and for the community at large."

Leary did not contest the state's request that his client be held without bail. Prosecutors have until Wednesday to file charges.