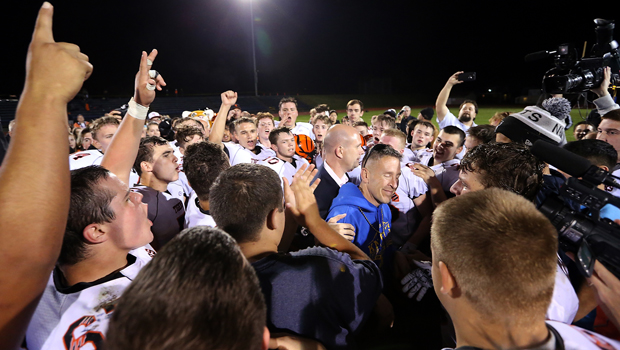 SEATTLE -- An assistant football coach who was fired from a Washington state high school for praying on the field after games sued the school district Tuesday, saying officials violated his religious rights.

The lawsuit filed by the First Liberty Institute, a Texas-based legal organization that focuses on religious freedom cases, wants Joe Kennedy restored to his coaching job with the varsity team at Bremerton High School, and it asks the U.S. District Court in Tacoma to rule that his postgame prayers are allowed.

Kennedy had prayed before and after games, sometimes joined by students, since 2008. The Bremerton School District said it did not want to be seen as endorsing religious activity and asked him to stop when the practice came to its attention last year. But he persisted by silently taking a knee and praying.

His case drew national attention. Dozens of lawmakers in the Congressional Prayer Caucus sent a letter to the superintendent expressing their support, and members of the Satanic Temple of Seattle caused an uproar when they arrived at a game clad in robes, makeup and ram's horns after being invited by students and teachers.

"Coach Kennedy is not motivated to engage in private religious expression in order to proselytize or attract others to his religious faith," the lawsuit said. "Instead, he offers a brief prayer of thanksgiving as part of a covenant he made with God before he started coaching at BHS."

Because Kennedy's prayers were about the players, their hard work and sportsmanship, "his sincerely held religious beliefs require him to pray on the field where the game was played," it added.

The school district said in an emailed statement Tuesday that it was reviewing the complaint and declined to comment on its merits. But it previously argued that students could feel coerced to participate in religious activity when they see their coaches lead or endorse it.

Officials said Kennedy was free to engage in religious activity that did not interfere with his public duties and was separate from students or non-demonstrative.

Last fall, the district praised Kennedy's contributions to football program but said his prayer posed a risk it would be held liable for violating the constitutional rights of students or others.

Kennedy's lawyers insist that the school district has misinterpreted prior court rulings concerning the religious rights of public employees. They also argued that it has taken no action against another football coach who has performed a Buddhist chant at the 50-yard line after games.

The school's "blanket ban on any demonstrative religious expression by Coach Kennedy violates the First Amendment, as does its decision to take adverse employment action against him because of such expression," the lawsuit said.