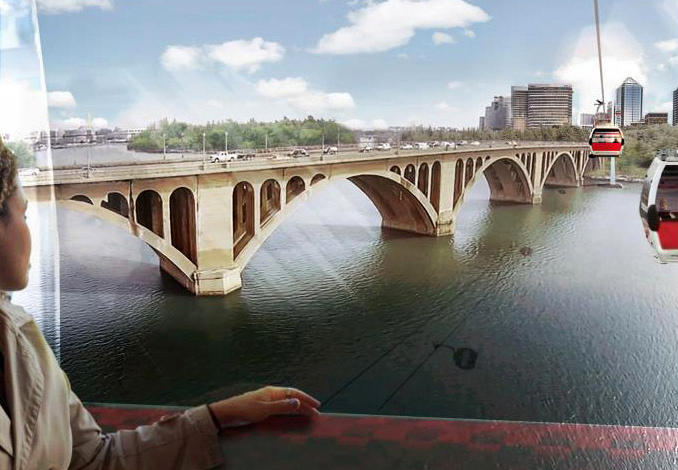 WASHINGTON -- A proposal to build a ski resort-style gondola system over the Potomac River connecting the nation’s capital to nearby Virginia is technically feasible and would cost $80 million to $90 million to build, according to a study released Thursday.

The bottom line: the aerial gondola project isn’t some fanciful, futuristic idea or a tourist gimmick, and it’s an option for commuters that’s “cool and feasible,” said Joe Sternlieb, the president of the Georgetown Business Improvement District, one of the groups that paid for the study.

The study said if officials want to move forward, getting the necessary state and local approval to build the project would take three to four years, and construction would take two years. The system of enclosed cabins would likely have a weekday ridership of 6,500 and just under 2 million riders a year.

The proposal envisions a 4-minute ride with cabins coming every 20 to 60 seconds. Each cabin would hold eight to 12 people, Sternlieb said.

Similar urban systems carry passengers in Portland, Oregon, and New York City. The Portland system opened in 2007 while a tram system in New York has been taking passengers to Roosevelt Island since 1976.

In Washington, the idea is for the system to be an extension of the region’s Metro train system, with riders using their Metro card, Sternlieb said. It would link Virginia with Washington’s Georgetown neighborhood, which does not have a Metro stop.

Mary-Claire Burick, the president of the Rosslyn Business Improvement District, another group that helped pay for the study, called the project an affordable transit solution.

The study identifies several possible endpoints of what’s being called the Georgetown-Rosslyn Gondola. One side would be near the Rosslyn Metro station in Arlington, Virginia, and the other near Georgetown University in Washington. The system would cost $3.25 million a year to operate and maintain, the study said.

The next step for the project is for regional officials and leaders to take a look at the results. If officials want to move forward, they would need to discuss funding and conducting an environmental impact study.

The District of Columbia, Arlington County, Georgetown University and others helped pay for the study.