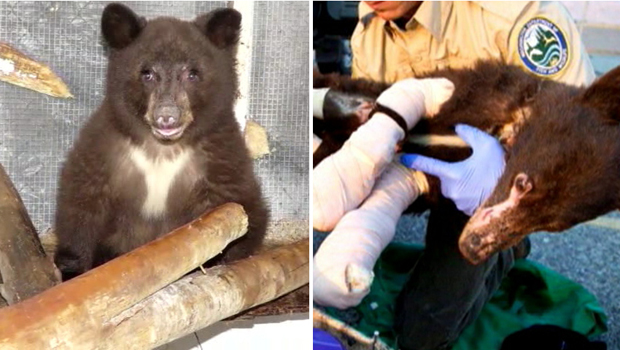 The bear would have surely died a painful death if she hadn't been rescued. She was covered with scorch marks and had burns on her face and third-degree burns on her paws.

Her paws were burned so badly that when she was found she was walking on her elbows. Rescuers named her Cinder.

After months of rehabilitation, the bear is big, healthy and active.

On Tuesday, Cinder was moved from a rehab center near Boise, Idaho, to Central Washington, where she'll be released.

The exact location where Cinder and another bear that was found orphaned last November isn't being released, but it's about 30 miles north of Leavenworth, not too far from Cinder's old home.

Wildlife experts have made sure the area has a lot of naturally growing foods.

The claws on the bear's hind paws were disfigured in the fire last August, but the rehab experts said she has learned how to adapt and can still climb trees.

If all goes well, Cinder will be back in the wilderness of the North Cascades Wednesday night.