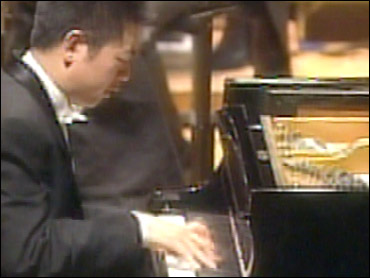 The song, "My Motherland," is the theme to film "Battle on Shangganling Mountain," about a communist "People's Volunteer Army" defeating U.S. military "jackals" in a Korean War battle.

"The movie and the tune are widely known among Chinese, and the song has been a leading piece of anti-American propaganda by the Chinese Communist Party (CCP) for decades," the Epoch Times reports."CCP propaganda has always referred to the Korean War as the 'movement to resist America and help [North] Korea.' The message of the propaganda is that the United States is an enemy--in fighting in the Korean War the United States' real goal was said to be to invade and conquer China. The victory at Triangle Hill was promoted as a victory over imperialists."

The newspaper further reports that the CCP very likely knew in advance that Lang Lang would play the anti-American song and that the pro-government Phoenix TV network even broadcast an interview with Lang Lang talking about playing the song shortly in advance of the actual performance.

"I thought to play 'My Motherland' because I think playing the tune at the White House banquet can help us, as Chinese people, feel extremely proud of ourselves and express our feelings through the song. I think it's especially good. Also, I like the tune in and of itself, every time I hear it I feel extremely moved," Lang Lang said in the interview.

But a blog post by the Wall Street Journal's Cathy Yan argues that "Lang Lang himself appears to have been blissfully unaware of the political minefield he was stumbling into," and cites some of the same comments cited by the Epoch Times as evidence of the slight.

"Born in China, Mr. Lang went to the U.S. as a teenager to study at the Curtis Institute of Music in Philadelphia. He is fluent in both English and Mandarin. He is probably equally adored by classical music fans in the U.S. and in China, and splits his time between the two countries," Yan notes.

She also quotes a Chinese film expert who says that song is primarily identified with Chinese nationalism and not some veiled insult to the United States.