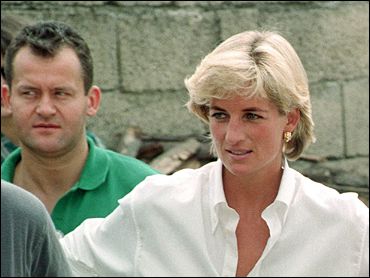 For the third day in a row, what the butler saw and heard is making headlines.

On Wednesday, Earl Spencer, brother of Britain's Princess Diana, is alleged to have told her he hoped she was getting help for her mental illness. CBS News Correspondent Elizabeth Palmer reports for The Early Show.

Diana is now buried at the earl's ancestral home, Althorp, but in letters written to her after her marriage to Charles failed, the earl wrote he feared for her.

"I know how manipulation and deceit are parts of the illness," he wrote, "I hope you are getting appropriate help."

Buckingham Palace correspondents are getting more of an airing, too. Excerpts from Prince Philip's letters to Diana showed that he and the queen disapproved of Charles and Diana taking lovers. All of these are excerpted from a book by Paul Burrell, Diana's former butler. It goes on sale next week.

Although they've attracted tabloid attention, Burrell's revelations are widely seen as an abuse of Diana's trust and motivated by greed.

Royal watcher Victoria Mather from Tatler magazine says, "I wonder what else he has? You know? From a frail princess over a volatile position, what else has he of hers? What else did he wheedle out of her?"

And Ingrid Seward, editor-in-chief of Majesty magazine, says, "I think it shows Diana as a very vulnerable and insecure woman, which we already knew."

In spite of Diana's frailty, the drama of her life can still command newspaper headlines six years after her death.

"Back to Life After a Heart Crisis"