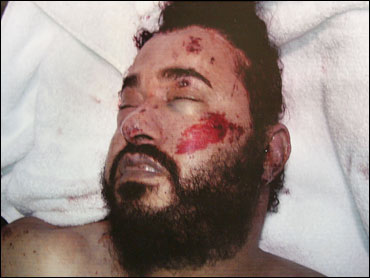 An Iraqi man who was one of the first people on the scene of the U.S. airstrike targeting Abu Musab al-Zarqawi said he saw American troops beating a man who had a beard like the al Qaeda leader.

U.S. troops arriving on the scene wrapped the man's head in an Arab robe and began beating him, said the local man, who refused to give his name or show his face to the camera. His account could not be independently verified.

The U.S. military made no mention of any physical contact between U.S. troops and al-Zarqawi other than an attempt to provide him with medical attention.

Al-Zarqawi died shortly after the U.S. military obliterated his hideout northwest of Baghdad Wednesday with two 500-pound bombs. The bombs tore a huge crater in the date palm forest where the house was nestled outside the town of Baqouba.

Initially, the military had said al-Zarqawi was killed outright. But on Friday, the spokesman for the U.S.-led forces in Iraq said Iraqi forces found al-Zarqawi clinging to life.

"He mumbled something, but it was indistinguishable and it was very short," Maj. Gen. William Caldwell said of the Jordanian-born terrorist's last words.

Iraqi police pulled him from the flattened home and placed him on a makeshift stretcher. U.S. troops arrived, saw that al-Zarqawi was conscious, and tried to provide medical treatment, the spokesman said.

"He obviously had some kind of visual recognition of who they were because he attempted to roll off the stretcher, as I am told, and get away, realizing it was the U.S. military," Caldwell told Pentagon reporters via videoconference from Baghdad.

Al-Zarqawi "attempted to, sort of, turn away off the stretcher," he said. "Everybody re-secured him back onto the stretcher, but he died almost immediately thereafter from the wounds he'd received from this airstrike."

So much blood covered al-Zarqawi's body that U.S. forces cleaned him up before taking photographs. "Despite the fact that this person actually had no regard for human life, we were not going to treat him in the same manner," Caldwell said.

The airstrike killed two other men and three women who were in the house, but only al-Zarqawi and his spiritual adviser have been positively identified, he said.

From a helicopter hovering above the site, a wide swath of destruction could be seen. There were no remaining walls in the house, The debris included a skimpy slip in a leopard skin pattern and other see-through pieces of women's clothing. In the crater itself were charred dresses, torn blankets, thin sponge mattresses and pillows.

Also scattered among the debris of concrete blocks was a pillow with a floral pattern, sandals and a bag. There was also a foam mattress, a cooler and part of a washing machine. Green pomegranates hung from a tree left standing nearby.

Lt. Col. Thomas Fisher of the 1st Battalion, 68th Armored Cavalry said his men showed up at the site about five minutes after the blast and threw up a cordon.

He said they had a patrol in the area already and secured it with two tanks and 10 humvees.

"We didn't know it was Zarqawi, we just knew it was a time sensitive target," he told reporters at the scene early Saturday. "we suspected who it was."

Caldwell also said experts told him it is not unheard of for people to survive a blast of that magnitude.

"There are cases when people, in fact, can survive even an attack like that on a building structure. Obviously, the other five in the building did not, but he did for some reason," Caldwell said.

He said he did not know if al-Zarqawi was inside or outside the house when the bombs struck.

"Well, what we had found, as with anything, first reports are not always fully accurate as we continue the debriefings. But we were not aware yesterday that, in fact, Zarqawi was alive when U.S. forces arrived on the site," Caldwell said.

His recounting of the aftermath of the airstrike could not be independently verified. The Iraqi government confirmed only that Iraqi forces were first on the scene, followed by the Americans.

An aide to Prime Minister Nouri al-Maliki, speaking on condition of anonymity because he was not authorized to talk to the media, said he saw Caldwell's news briefing but could neither confirm nor deny that al-Zarqawi briefly survived the blast.

"Well, I think it's clear: The Americans said he was seriously wounded and he died," the aide said.

As officials debated al-Zarqawi's death, Iraqi Sunni insurgent groups sent their condolences for Zarqawi in Web messages Saturday and warned Sunnis not to cooperate with the Iraqi government, apparently an attempt to keep solidarity in their ranks after the death of the al Qaeda leader.

While there has yet to be a violent reprisal by al Qaeda for al-Zarqawi's death, Shiites are likely to be a prime target, reports CBS News correspondent Elizabeth Palmer.

One insurgent group, Ansar al-Sunnah, posted a gruesome video showing militants interrogating and then beheading three Iraqis said to be members of a Shiite "death squad" that killed Sunnis.

Such beheading videos have become rare in the past year, and the posting of one now on a militant Web forum could aim to show that insurgents will remain as fierce as ever after al-Zarqawi's death.

The condolence statements came from Ansar al-Sunnah and the head of the Mujahedeen Shura Council, an umbrella organization of five insurgent groups, including al Qaeda in Iraq, that al-Zarqawi helped found last year.