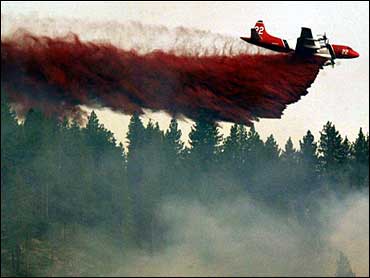 Firefighters worked Saturday to corral a wind-driven wildfire north of Los Angeles that has destroyed several buildings and kept hundreds of people from returning home.

The fire had shifted away from two rural communities, but continued to threaten homes and businesses, as well as a habitat for the California condor and spotted owl.

It was one of dozens of wildfires raging across the West, many in California, where officials said they had found 200 fires in the last 48 hours.

"It's as dry as it's ever been for this time of year. The worst is ahead of us," said Karen Terrill of the California Department of Forestry.

The nearly 16,000-acre fire about 45 miles north of Los Angeles has destroyed three houses and several other buildings since it broke out Monday. Although 500 residents began returning home to Lake Hughes and Elizabeth Lake after winds drove the flames away from the areas, hundreds more remained displaced, officials said.

About 200 teenagers were evacuated in the middle of the night from two county juvenile probation camps as flames crept within several miles, said Ken Kondo, spokesman for the Probation Department. The youngsters, most of whom were convicted of nonviolent crimes, were taken to another probation camp.

Investigators suspected the fire was "human caused," said Dianne Cahir, a spokeswoman for the U.S. Forest Service. Nearly 2,000 firefighters were battling the blaze, she said.

In Nevada, a bevy of firefighters blocked the "meanest, ugliest" wildfire from destroying any more homes in Carson City, after it burned 14 upscale homes in two days.

Still, firefighters who got a line around half of the 7,600-acre blaze on Friday warned that extremely dry conditions make the blaze especially risky.

Investigators believe that teenagers who were in a canyon Tuesday may have started the fire. Several youths have been interviewed, Carson City Sheriff Kenny Furlong said.

Conditions were so hazardous that the blaze burned through retardant dropped by tankers, authorities said.

"I think we'd describe it as the meanest, ugliest and kind of an uncooperative fire," Gov. Kenny Guinn said. "It's a cantankerous fire that will not follow the rules. It goes in every direction."

There was concern that gusty winds, which slowed Friday, could pick up again over the weekend, Guinn said.

"This is far and away the worst fire I've ever seen in 24 years of firefighting," Acting Carson City Fire Chief Stacey Giomi said at a meeting attended by hundreds of people, many of them evacuated from homes. They were allowed to return to their homes on Friday.

"There's still plenty of fire out there," said Peter D'Aquanni of the Sierra Front Interagency Dispatch Center. "If the wind starts blowing again it could be off to the races."

Despite the hazards, only five people have been injured and hundreds of homes have been saved.

The count of burned homes could be as high as 16, Giomi said. One business was destroyed, along with 25 barns, garages and other outbuildings since the blaze broke out before dawn Wednesday.

About 1,500 firefighters were on the lines, assisted by several air tankers, helicopters, bulldozers.
(c)MMIV, The Associated Press. All Rights Reserved. This material may not be published, broadcast, rewritten, or redistributed