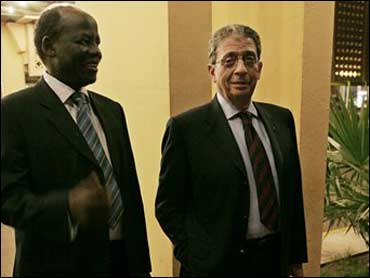 Somalia's foreign minister and a representative of the faction that controls the country's capital signed an agreement here Thursday that calls for an immediate cease-fire and confers mutual recognition on the warring parties.

"The parties have committed themselves to cease all verbal provocation and all military action," the secretary general of the Arab League, Amr Moussa, said at the signing ceremony, which was presided over by Sudanese President Omar al-Bashir.

"The two parties agreed to reach a compromise that preserves the unity and integrity of Somalia," Moussa told reporters.

He said the delegation from the Islamic Courts, the militia that controls the capital, Mogadishu, and most of southern Somalia, agreed to recognize the legitimacy of the interim government, which is based in Baidoa, 155 miles northwest of Mogadishu.

The U.N.-backed government "recognizes the reality and existence of the Islamic Courts" Moussa said.

Both parties also agreed to prosecute war criminals and to reconvene on July 15 in Khartoum to negotiate a full peace agreement without preconditions, Moussa said.

"We have no interest in shedding any blood, and we will seek every possible way to preserve the life the Somalis," Yusuf said.

Foreign Minister Abdallah Sheikh Ismail signed the agreement with the chief delegate of the Islamic Courts, Mohamed Ali Ibrahim. The two men hugged each other afterward.

Somalia has been without an effective central government since warlords toppled dictator Mohamed Siad Barre in 1991 and then turned on each another.

The transitional government established in 2004 has the support of the international community, but it wields little power and includes some of the warlords blamed for the country's disintegration.

The Islamic Courts Union, which groups moderate Muslims as well as fundamentalists, took Mogadishu earlier this month after sporadic battles with an alliance of warlords that had gone on for months.

The group aims to establish an Islamic state. Its leaders portray themselves as a new force capable of imposing the order that many Somalis long for. But the extremism of some of its members and allegations of links to terrorism have provoked international concern.