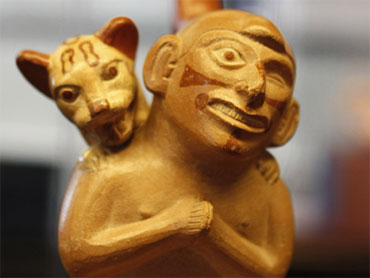 The latest show at Paris' Quai Branly museum comes with a warning for visitors: "This exhibition of Moche ceramics shows sexual acts of an explicit nature."

But the extraordinary and graphic testimonial of the ancient Moche civilization of Peru isn't about physical pleasure or procreation, according to the curator.

He says the sexual acts evoke the rituals that accompanied the death of dignitaries, and the human sacrifices that went with them. They tell a story about the power of the elite that he says has parallels with modern life.

The Moche lived on what is now the northern coast of Peru between the first and eighth centuries. The ancient Andean people belonged to one of the first societies to organize itself in way that would be recognized as a state, constructing cities with elaborate monuments and specialized centers for the production of textiles, metal and ceramics.

Their culture is on display at the anthropological Quai Branly museum, whose recent exhibits include an exploration of the Teotihuacan people of ancient Mexico and a tribute to African literature and culture.

The visitor to the Moche show is asked to look beyond the graphic nature of the exhibits, such as the outsize penis used for pouring liquids, or the grimacing woman being forced to perform oral sex.

Some of the acts are disturbing and violent - but not in the provocative fashion of pornography or some modern artists.

Curator Steve Bourget, a professor at the University of Texas at Austin who has made his career studying the Moche, says he believes they were part of ritual or sacrificial ceremonies - bloodthirsty and wild though strictly controlled affairs.

Some of the ceramics are almost anatomical - the Moche artists have made clear, often in minute detail, the nature of the acts they are depicting.

That may be because the artists were making what Bourget says is an important distinction between vaginal intercourse, which is rarely shown, and other forms of sex.

Vaginal sex is usually performed by a supernatural being called Wrinkle Face - which Bourget believes makes it associated with the afterlife.

Non-vaginal intercourse often involves women engaging in sex with skeletal beings or sacrificial victims, seen as inhabiting a place between this world and the next.

As such Bourget believes the sexual acts are linked to a ritual inversion of order which takes place during funerary or sacrificial rituals associated with the transition into the other world.

"How do you go back from being dead into going in another form of life?" he told The Associated Press during a visit this week. "All the cultures have problems with that."

Both an anthropologist and an archaeologist, he says its only possible to understand such a long-gone culture because "I eat the Moche, I sleep the Moche, I talk to the Moche."

It's a relationship that seems to be working out for him.

"The Gods of the Moche seem to like me so they keep letting me find stuff," he says.

Fifteen years ago he discovered the broken and sex-sated bones of male warriors who'd lain for centuries in a massive sacrificial site.

After the first bodies were discovered, it took archaeologists several days to work out what they had found, but the cut marks on the throats, on the vertebrae, on the neck bones gave it away.

He also found outfits, textiles, and objects similar to those depicted in the ceramics, after which "it's only a small step" to imagine them performing the sexual rituals.

Originally interpreted as evidence of a decadent culture, Bourget says the sexual acts should be seen as a visual discourse on the power of the Moche elite.

It's a story that has parallels with modern debates from the burqa to the death penalty.

"All state societies be they French, be they American, be they any, are by definition violent systems," Bourget said.

"The state gives itself the right to kill, to put people in jail, to control them."

In places where the ideological pole is strongest - from the Moche sacrifices through Ancient Rome to modern day Texas - the state tries to magnify its power through ritualized violence.

He says the Moche religion is not the only one to seek to control sexuality. The burqa is a form of control, as is the Catholic aversion to condoms, he says.

"You control sexuality, you control access to it, and in the process you give yourself power over groups, over people and you embed this power into values and you disseminate the values as being part of the population," he says.

"The population accept this because they believe its part of their values. They don't think they are being controlled."