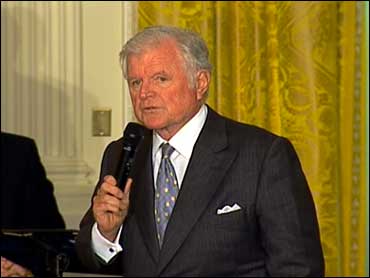 (AP)
Sen. Edward Kennedy was the recipient of a standing ovation when he appeared at President Obama's health care summit today.

"I'm looking forward to being a foot soldier in this undertaking and this time we will not fail," said Kennedy, who has long pushed for health care reform.

"I feel that now is the time for action," Kennedy added. "…I've seen other times when the House and Senate have made efforts, but they haven't been kind of serious efforts that I think we're seeing now."

The 77-year-old Massachusetts Democrat, who has been battling brain cancer in Florida, has not been in Washington since he voted on the economic stimulus package in February.

"To Sir Edward Kennedy," the president said as Kennedy got the warm reception. "That's the kind of greeting a knight deserves."

Mr. Obama was referencing this week's news that Kennedy will be given an honorary knighthood in Britain.

Following the ovation, which took place at the outset of a question and answer session, the president joked, "since he got such a weak reception when he walked in, it's only fitting that we give Ted Kennedy the first question."