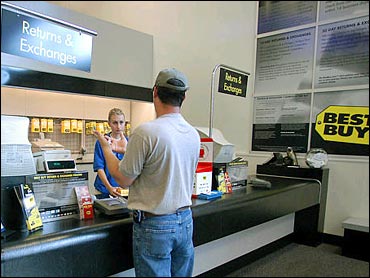 So much for the customer always being right.

Some retailers are deciding that the customer can be very, very wrong - as in unprofitable. And some, including Best Buy Co. Inc., are discriminating between profitable customers and shoppers they lose money on.

Like a customer who ties up a salesworker but never buys anything, or who buys only during big sales. Or one who files for a rebate, then returns the item.

"That would be directly equivalent to somebody going to an ATM and getting money out without putting any in," Brad Anderson, Best Buy's chief executive, said in a recent interview. "Those customers, they're smart, and they're costing us money."

Anderson said Best Buy is tightening its rebate policies in the case of customers who abuse the privilege, but declined to say what else his company is doing to discourage its most costly customers.

"What we're trying to do is not eliminate those customers, but just diminish the number of offers we make to them," Anderson said.

Selden, a consultant who works for Best Buy, co-wrote "Angel Customers & Demon Customers." In his book, he said that while retailers "probably can't hire a bouncer to stand at the door and identify the value destroyer," they're not powerless.

Selden, a business professor emeritus at Columbia University, said an investment firm found that one customer with a portfolio of $500,000 was tying up three financial advisers almost full-time with requests for help and information. "Eventually, reluctantly, and very politely, in this one case the company asked him to go elsewhere," Selden said.

Selden worked as a consultant for Royal Bank of Canada, which at one time traced checks faster for its most profitable customers, while other customers waited up to five days, he wrote. While that's a bit out of date, the bank now has other ways of prioritizing customers.

Laura Gainey, vice president of client segment strategies, said the bank's phone system sends certain customers to the front of the line, where they get the most experienced customer service representatives, depending on criteria that includes their account size.

"I don't really believe that any customer at Royal Bank is a demon customer," she said, "but there's no doubt that there are different ways of approaching different customers, which will allow us to better serve their needs, and allow us to serve the bank and our shareholder's needs."

Sometimes it is the retailer's fault that a customer is unprofitable, Selden said. He cited an upscale retailer in New York that lost sales because its changing rooms were dirty and in bad repair. Women who had probably taken up a salesperson's time were declining to change in those rooms, and declining to buy, he said.

"Then there are those customers that are just evil customers ... fundamentally they're out to cheat us," Selden said in a telephone interview. "It's not a large number of customers, but they can have a material impact on a business."

Once in a while, stores need to "fire" their worst customers, Selden said. Filene's banned two sisters from all 21 of its stores last year after the clothing chain's corporate parent decided they had returned too many items and complained too often about service.

The sisters claimed they had been loyal customers for years.

Best Buy executive vice president Philip Schoonover said the idea of "firing" some customers is one place where Best Buy disagrees with Selden. The company will try to find ways to make money-losing customers profitable, he said.

Retail consultant Karl Bjornson of Kurt Salmon Associates said the idea of discouraging bad customers can work if a company is careful about it. He said it generally works better to, say, offer fewer sales rather than discouraging individual customers who shop aggressively on price.

Every store has customers it doesn't like, he said.

"The question is, how public do you go with it, and how big a deal do you make out of it? There are ways of discouraging people from shopping in your store without point-blank telling them you don't want them in your store."

Best Buy customer Steve McCuskey pondered the company's efforts with a set of computer speakers in his hand. McCuskey, an industrial chemical salesman, said he shares Best Buy's frustration with "extreme price shoppers" who are so low-cost oriented that it's tough to make money off of them. He said he recently paid extra to buy a better portable compact disc player for his son after the first one lasted just four months.

"I'm definitely looking for the best price, but I'm also tired of cheap stuff that's going to break right away," he said.