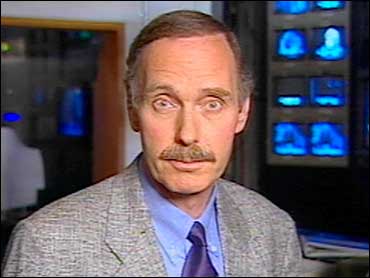 CBS News Correspondent John Blackstone reports it was a day of defining images, and at World Link television, they poured in from 16 different channels in the Middle East. World Link translates Middle Eastern news programs for 20 million Americans who subscribe to satellite TV.

"If you get the whole picture, you might know a bit more about the Middle East," says David Michaels of World Link TV.

The effort to overthrow Saddam has had a different emphasis depending on where you were watching.

From the Hezbollah station in Lebanon: "More and more civilians are being killed by U.S. And so-called 'smart bombs,'" says the anchor of Al Manar TV.

The statue coming down was mentioned only briefly.

"If you topple the sculpture of one dictator might give some ideas to other people in the middle east that something is wrong with their regimes," Michaels explains.

Abu Dhabi viewers saw Iraqis welcoming Americans with kisses and saying good-bye to Saddam with curses. A man was shown hitting a poster of Saddam with a shoe saying, "This is the fate of every traitor. Oh, people look what he did to Iraq."

The channel also reported that order broke down in Baghdad.

"They looted everything. This man did not even spare the flowers. He took them as well, maybe to give them as a gift to someone during these difficult days," a reporter said.

Middle Eastern television generally expressed no regret over Saddam's apparent overthrow. There are, however, many questions about the future.

As images of American tanks were shown in Baghdad, Jordanian TV asked, "Could this be the quiet that precedes the storm?"

Souheila Al- Jadda of World Link asks, "Will it be government and administration of the people and by the people, as many leaders in the United States have said? Or will it be more of an occupation?"

The Arab media's portrayal of what comes next could determine how the Middle East views America for years to come.