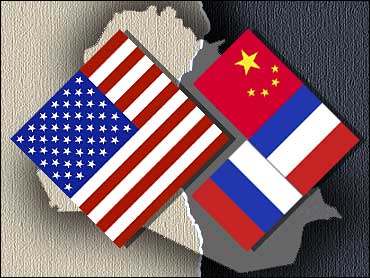 Secretary of State Colin Powell, meeting stiff resistance to U.S. and British calls for possible military action against Iraq, warned the world not to be taken in by "tricks that are being played on us."

In his presentation to the sharply divided U.N. Security Council, chief U.N. weapons inspector Hans Blix cited improved cooperation on the part of Saddam Hussein's government. But he also said inspectors found missiles with a range exceeding the permitted limits and chastised Iraq for not giving a full accounting of chemical and biological weapons programs.

Blix's counterpart, nuclear chief Mohamed ElBaradei, told the council that inspectors found no evidence Iraq had resumed its nuclear weapons program and said inspectors could do their job without Iraq's full cooperation.

"I would say it certainly wasn't everything the U.S. asked for. The tone may have been a setback for the U.S.," McCarthy says. And Blix also "did not accept whole cloth" the U.S. interpretation of satellite photos which Powell said were clear evidence of Iraqi movement of weapons.

But, says McCarthy, "it really comes down to the last sentence" of Blix's report, which states that inspection and disarmament could still be achieved quickly in Iraq, "if immediate active and unconditional cooperation … were to be forthcoming."

Blix did not say in his report what the U.N. wanted done with these missiles, but under the U.N. resolutions, any proscribed weapons found in Iraq must be destroyed, removed or rendered harmless – which Iraq says it will not allow.

The reports were strong fodder for Russia, France and China. The three veto-holding council members responded with calls for continued inspections and resisted any move toward war.

Diplomats in the chamber and members of the public in the gallery greeted the remarks of the French and Russian foreign ministers with applause. The rare response caught the council by surprise and led German Foreign Minister Joschka Fischer to ask for order inside the chamber.

Powell's comments did not receive any applause.

"The threat of force must remain," Powell told the council, adding that Iraq was strengthening its links with terror groups. "We cannot wait for one of these terrible weapons to turn up in our cities."

British Foreign Secretary Jack Straw urged all 15 members to "hold our nerve in the face of this tyrant," Saddam.

But as CBS Chief White House Correspondent John Roberts reports, the report only seemed to cement the split at the Security Council - 11 nations now want to give inspections more time - only four want the game declared over.

The White House had expected a low-key report, and is still likely to press ahead with a call for a resolution authorizing force.

White House spokesman Ari Fleischer says it's too soon to say when the U.S. will submit that resolution. British diplomats said a draft of a new resolution could be introduced as early as Saturday.

The U.S. and Britain say they are willing to go to war against Iraq without U.N. backing, but would prefer to have it.

French Foreign Minister Dominique de Villepin told the council that U.N. inspections, which resumed in November after a four-year break, "are producing results" and should continue.

Chinese Foreign Minister Tang Jiaxuan echoed those remarks. "Only when we go along the line of political settlement can we truly live up to the trust and hope the international community places in the Security Council," he said.

Apparently sensing that a moment of decision was near, Iraqi President Saddam Hussein issued a presidential decree Friday banning the importation or production of nuclear, biological and chemical weapons.

In the 11 weeks of inspections, Blix said, his team has conducted 400 checks on 300 sites. Blix said Iraq continued to grant unfettered access. But he reiterated his concern that many weapons systems were not accounted for.

On the key question of how long inspectors want their work to continue, Blix was vague.

"The answer depends upon which task one has in mind," he said, adding that the inspectors have several jobs, including finding and destroying weapons and preventing new programs from being launched.

Independent missile experts found this week that the al-Samoud missile system, which Iraq declared in its 12,000-page weapons declaration in December, slightly exceeds the 93-mile range set by U.N. resolutions.

Blix concluded that "This missile system is therefore proscribed for Iraq." Another missile system, the al-Fatah, could not be judged until Iraq provided more information, he said.

Blix said it was significant that "many proscribed weapons and items are not accounted for."

As an example, he cited a document that suggested some 1,000 tons of chemical agent were unaccounted for. Although he said he could not conclude the chemicals still exited, there was no proof that they had been destroyed.

As he has in previous briefings, Blix stressed that his teams were growing in strength and capacity. He told the council that his team's ability to check for illegal weapons was improving: new regional offices were getting up and running, and Iraq was cooperating by allowing its eighth helicopters to patrol the no-fly zone without minders, and had reduced the number of minders during inspections.

He said the inspectors expected next week to start using U-2 planes, French Mirage jets and German drones to aid its searches. Blix voiced hope that two new Iraqi commissions set up to assist the weapons search. He said that three scientists who once refused private interviews accepted, and the meetings "proved informative." But since those meetings, no others have accepted those interviews.

Blix addressed several charges advanced by Powell in his briefing on Iraq's alleged violations last week, including the accusation that Iraq has moved weapons around the country and sanitized sites before inspectors arrived.

Blix said that, "conventional arms are being moved around the country, and movements are not necessary related to weapons of mass destruction."

As for satellite photos showing what Powell said were decontamination trucks at suspected weapons site, Blix said the images "were taken several weeks apart," and said the trucks' movements "could just as easily have been a routine activity."

Addressing U.S. charges that Iraq was evading inspections by infiltrating the teams, Blix said, "In no case have we seen convincing evidence that the Iraqi side knew in advance that the inspectors were coming."

ElBaradei said the matter of high-strength aluminum tubes that Iraq tried to import hasn't been closed. He has said previously that the IAEA believes Iraq intended to use the tubing for conventional rockets.

On Friday, he said Iraq provided new documentation on the tubes, a reported attempt to import uranium, the procurement of magnets and magnet production capabilities, and the use of the explosive HMX.