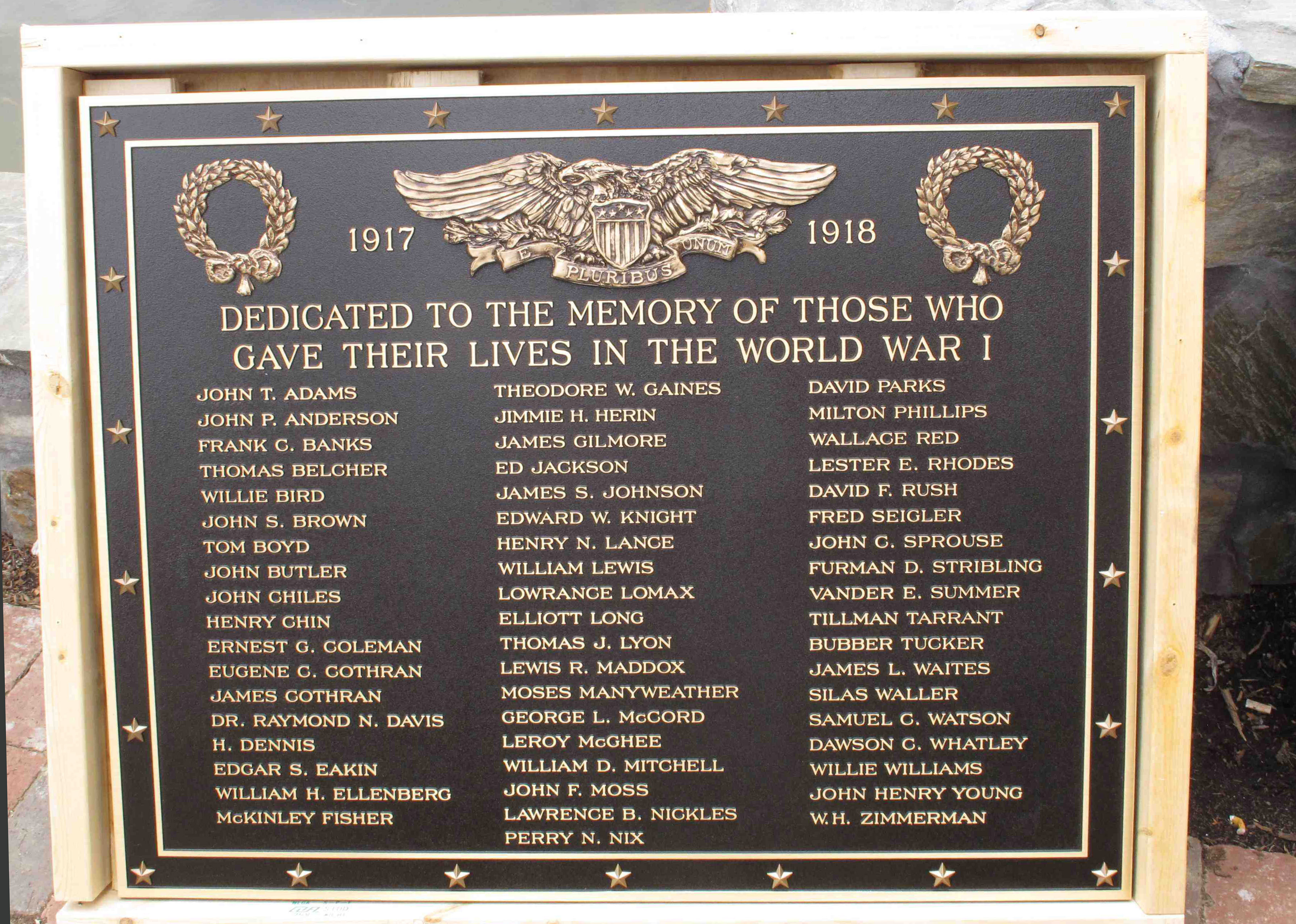 GREENWOOD, S.C. -- Along Main Street in a small South Carolina city, there is war memorial honoring fallen World War I and II soldiers, dividing them into two categories: "white" and "colored."

Welborn Adams, Greenwood's white Democratic-leaning mayor, believes the bronze plaques are relics of the South's scarred past and should be changed in the spirit of equality, replaced like the "colored" water fountains or back entrances to the movie theater that blacks were once forced to use.

Yet the mayor's attempt to put up new plaques was blocked by a state law that brought the Confederate flag down from the Statehouse dome in 2000. The law forbids altering historical monuments in any way without approval from legislators.

Historians, black and white, have reservations about replacing the plaques, saying they should serve as a reminder of the once-segregated U.S. military.

"Segregation was the accepted social order of that time," said Eric Williams, who spent 32 years as a historian with the U.S. Park Service. "If we alter the monument, we alter its historical integrity."

The memorial is owned by the American Legion post in Greenwood and is on city property. On two of its sides, it lists soldiers who died in World War I and World War II that were from Greenwood County. A third side lists Korean and Vietnam War dead from the county without any racial distinction because the military was integrated by that time.

Adams said he asked other South Carolina mayors and doesn't know of any other similar memorials in the state. Several historians also said they haven't heard of a monument where fallen soldiers are separated by race.

About a year ago, American Legion post members asked the mayor if he thought he could raise $15,000 privately to change the monument. He was so sure he could, he took out a loan to pay for the new plaques so they could be dedicated on Martin Luther King Jr. Day.

Forty-three donors, almost all white, came through with the money. Adams wrote a $1,000 check himself.

But there was opposition, in part because of a quote from the mayor in a December story in The Index-Journal of Greenwood. "I think if history offends people, it needs to be rewritten if possible," Adams said.

The mayor acknowledged he didn't choose his words carefully. He later said he meant that while history doesn't change, the way a community presents itself does.

Days before the King Day ceremony, opponents threatened to try to have Adams arrested - perhaps on a misconduct in office charge - if he went forward with the new plaque. The mayor said he cried in his office when the city's lawyer told him that opponents were right about the law.

"I wonder if some of the opposition is racism hiding behind history," said Adams, who was elected mayor in 2008 in this city of 23,000, where about 45 percent of the population is black.

The Confederate flag law says no historical monument, erected by the state or by a local government, may be relocated, removed, disturbed, or altered without a two-thirds vote from state lawmakers. The law lists 10 wars, including the "War Between the States," - the genteel, Southern name for the Civil War.

The purpose of this part of the law was to appease people who worried 15 years ago that Confederate memorials and street and park names in honor of generals would be torn down in wake of the flag being removed from the Statehouse dome and being put in front of the South Carolina Capitol alongside a Confederate soldier monument. The flag is still a sore point for the NAACP and other black leaders.

A bill has been filed to change the Greenwood memorial and half of the members of the state Senate are listed as sponsors, but some legislators who helped craft the Confederate flag law are leery to bring the divisive issue up again.

"I'll look at the bill," said Sen. John Courson, a Republican from Columbia who has been in the Senate since 1985. "But I don't want to reopen the whole debate. That was last century's battle."

Williams, the former Park Service historian, has been one of the most vocal critics. Williams, who is white, wants to see a small display nearby saying the military was segregated back then and that's why the names are listed the way they are.

Activist Joseph McGill, who spends the night in old slave cabins to get attention to preserve them, agrees. He says talk about switching plaques reminds him of schools that don't want students reading "Huckleberry Finn" because of racially offensive language from the 1800s is in the book.

"That could just spread the perception that segregation did not exist or wasn't that bad," McGill said.

Chad Williams of Brandeis University in Boston has extensively studied black soldiers in World War I. He said he understands the desire to correct a historical injustice, but another sign explaining why the soldiers were separated by race is much more powerful and historically accurate.

"I think it is important to acknowledge the specific context in how African-American soldiers had to serve in the military," Williams said.

Will Moredock, a freelance journalist trying to get South Carolina to remove the statue of segregationist Gov. Ben Tillman from the Statehouse grounds, said that is shortsighted. Americans are given the power to change laws and even the framework of its government with amendments to the Constitution. So why should historical monuments be any different?

"Every generation has the right to choose the people and the causes it wishes to enshrine in its public places," Moredock said.

The mayor planned to put the old plaques in the county museum. For now, they remain on the monument and the new ones sit in City Hall storage, waiting for the Legislature to act.

"I am fully aware this is much tougher than I ever expected," Adams said. "But it's the right thing to do."