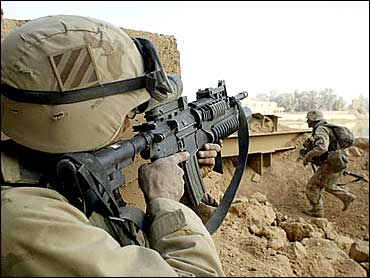 The technology is so good, the pictures are so clear that it is sometimes difficult to separate the war from the other programs on television.

We take the technology for granted and that makes it easy to forget just how dangerous war is — that this is not a movie where the soldiers get up for a retake after being shot and it is just as easy to forget the risks that people take to get those pictures from the battle field to our living rooms.

And then we are brought back to reality. Soldiers die and so do the reporters telling their stories. Last week we learned of the death of Michael Kelly, the Washington Post columnist who died when his vehicle overturned in a canal. He leaves a wife and two sons.

Today, we learned of the death of NBC News Correspondent David Bloom, as gentle a man and as brave a reporter as I ever knew, who died from a blood clot in the lungs after pushing himself to the limit — and past it — as he traveled with American troops as they made their way to Baghdad. He leaves a wife and three daughters.

I knew both reporters and it was not the glamour of the job that drew them to the battlefield but a passion to be where the story was, which is what reporters are supposed to do.

Because they — and the rest of the reporters covering the war — have been there, the rest of us are getting a new appreciation of the heroic job the American military has been doing. And because of them, the propaganda from Saddam Hussein's people is put to the lie daily.

But let their deaths remind us that this is not a television show — an option for those who don't like basketball.

This is a war, where people die and where the loss and human suffering is borne most of all by the families of both those who fight it and the reporters who tell their stories.