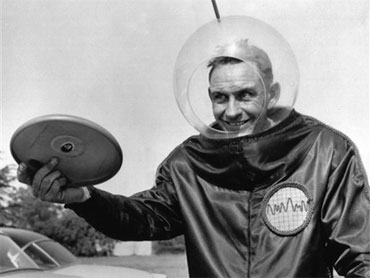 Walter Fredrick Morrison, the man credited with inventing the Frisbee, has died. He was 90.

Utah House Rep. Kay McIff, an attorney who represented Morrison in a royalties case, says Morrison died at his home in Monroe, Utah, on Tuesday. McIff is from Richfield, Morrison's original hometown.

"That simple little toy has permeated every continent in every country, as many homes have Frisbees as any other device ever invented," McIff said. "How would you get through your youth without learning to throw a Frisbee?"

Morrison's son, Walt, told The Associated Press Thursday that "old age caught up" with his father and that he also had cancer.

"He was a nice guy. He helped a lot of people," Walt Morrison said. "He was an entrepreneur. He was always looking for something to do."

Morrison sold the production and manufacturing rights to his "Pluto Platter" in 1957. The plastic flying disc was later renamed the "Frisbee," with sales surpassing 200 million discs. It is now a staple at beaches and college campuses across the country and spawned sports like Frisbee golf and the team sport Ultimate.

An official disc golf course at Creekside Park in the Salt Lake City suburb of Holladay is named for Morrison.

According to Kennedy, Morrison and his future wife, Lu, used to toss a tin cake pan on the beach in California. The idea grew as Morrison considered ways to make the cake pans fly better and after serving as a pilot in World War II, Morrison began manufacturing his flying discs in 1948.

He would hawk the discs at local fairs and eventually attracted Wham-O Manufacturing, the company that bought the rights to Morrison's plastic discs.

Kennedy says Wham-O adopted the name "Frisbee" because that's what college students in New England were calling the Pluto Platters. The name came from the Frisbie Pie Co., a local bakery whose empty tins were tossed like the soon-to-be Frisbee.

Walt Morrison said his father is survived by three children. The family is planning a service for Morrison's friends and relatives Saturday at the Cowboy Corral in Elsinore.