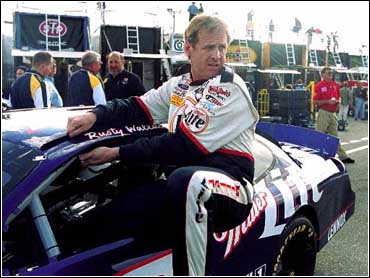 "We unloaded off the truck with a totally new car and engine combination and things didn't look too good," Wallace said after setting a record in qualifying for Sunday's Dura-Lube/Kmart 400.

Before the first practice was done, his Penske Racing South team had to deal with an engine miss and problems with the carburetor, the rev-limiter and the brakes on the new Ford Taurus.

"Everything we learned in the first practice, we threw on the car," Wallace said. "In the second practice, we blocked it off and ran a simulated qualifying lap and it was real good. Then we were two-tenths (of a second) faster in qualifying. I could hardly believe it."

Even with that great lap on the 1.017-mile Rockingham oval, Wallace might not have taken his 27th career pole had Mark Martin, winner of the Busch Series pole earlier in the day and the top qualifier in three of the last six Rockingham races, hadn't made a mistake.

Martin's Ford banged off the fourth-turn wall, slowing him enough that he wound up at 153.800, 44th among the 47 drivers who made qualifying attempts.

"I overdrove the car," Martin said. "It was loose and I had me a heck of a lap going. I should have slowed down a little bit. But, sometimes, you feel like you're invincible and I thought I could make it."

Ricky Rudd, who started from the outside of the front row in last Sunday's Daytona 500 his first race for Robert Yates Racing

But talk of a Taurus aerodynamic advantage diminished as Bobby Labonte took the third spot at 156.998 in a Pontiac Grand Prix, followed by the Chevrolet Monte Carlos of Dale Earnhardt and Jeff Gordon at 156.779 and 156.756.

Still, the uproar that prompted NASCAR to take the Daytona 500 winning Taurus of Dale Jarrett, the Grand Prix of Ward Burton and the Monte Carlo of Mike Skinner to the wind tunnel in Marietta, Ga., on Wednesday, didn't totally die down.

"It felt good in qualifying," Earnhardt said. "We'll see how it races on long runs. That's my biggest worry."

"On Friday, the Dale Earnhardts and Jeff Gordons are going to reach down and get a good qualifying lap, but where you'll see the difference again in on Sunday when the cars start sliding around out there," said Larry McReynolds, Skinner's crew chief.

Burton, who finished second on this track in the fall, was 11th, with Skinner 12th and Jarrett 23rd.

"We just never hit it exactly right today," said Jarrett, who has finished second in six of the last eight Rockingham races. "We didn't do exactly the right things to make it better from practice. The car was just OK."

Jarrett did take care of some pressing business Friday, finally having a talk with Martin. Martin was upset last Sunday after Jarrett appeared to go back on a deal and left Martin alone in the draft late in the 500.

"I don't know if I was looking to make Mark feel better or me feel better," said Jarrett, who declined to discuss the meeting in the garage area. "It wasn't about racing or anything; this was about friendship."

Waltrip, a three-time Winston Cup champion, began his final season behind the wheel with a 32nd-place finish in Daytona. But he was buoyed by Friday's showing.

"I tell you we were good at Daytona and just had some problems we couldn't fix," he said. "I was optimistic coming here."