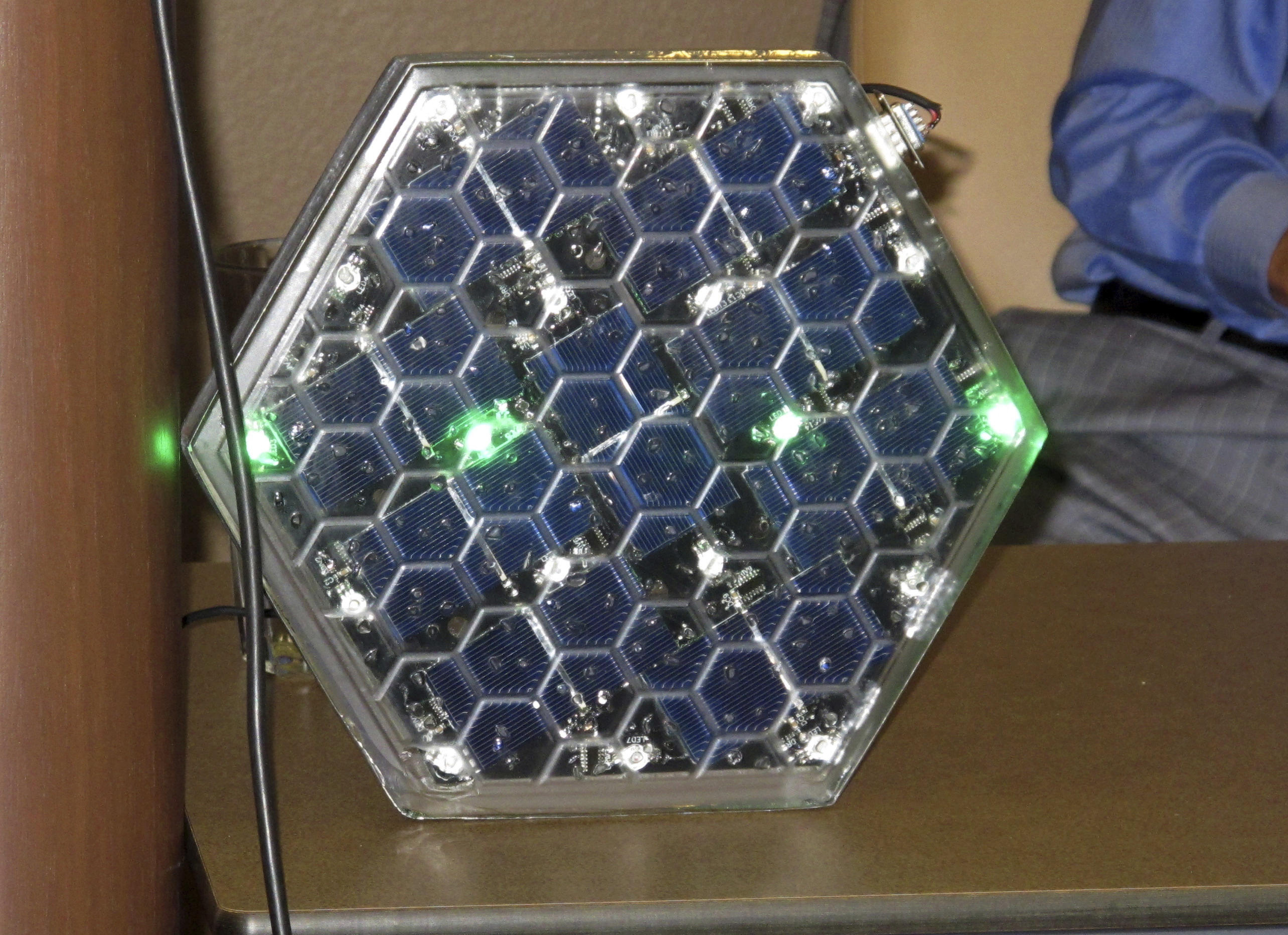 SANDPOINT, Idaho -- Scott Brusaw has a vision for the nation’s roads.

He believes the solar-powered glass pavers his company makes could transform thousands of miles of pavement into a new energy source.

His business, Solar Roadways, recently unveiled its first public installation, in a downtown plaza in this northern Idaho resort town. It’s 150 square feet of hexagon-shaped solar panels that people can walk and bicycle on.

The company is working on proof that the panels, for which it has a patent, are strong enough and have enough traction to handle motor vehicles, including semitrailers.

“Our plan is to replace all the asphalt and concrete,” said Brusaw, noting concrete occupies over 48,000 square miles in the U.S. “If you cover it with solar panels, we can make three times our energy needs.”

Solar Roadways is among a growing number of companies embracing renewable energy as the U.S. aims to reduce carbon emissions by one-third from 2005 levels by 2030.

But it is the only business receiving federal highway research money in pursuit of solar road panels, part of the Federal Highway Administration’s efforts to fight climate change, said Doug Hecox, a spokesman for the agency in Washington, D.C.

Brusaw and his wife, Julie, got the idea for their Idaho business after watching the Al Gore movie “An Inconvenient Truth” and deciding they also wanted to join the battle against global warming.

They aren’t the only ones eyeing roads and sidewalks as a potential energy source. A solar bike path was built in the Netherlands in 2014, and Germany and France have announced plans to build solar roads in the future.

The Brusaws hope to beat them into mass production. Incorporated in 2006, Solar Roadways has received three FHA grants, totaling $1.6 million, and funding from the state and a local economic development agency. It also drew 50,000 donors who raised $2.2 million on Indiegogo, a crowd-sourcing site.

Solar Roadways has been testing the strength of its half-inch-thick glass by dropping 1-pound steel balls on it from a height of 8 feet, a standard test for concrete. So far, the tests have been successful, Brusaw said.

The glass has a traction surface that is equivalent to asphalt. In tests, vehicles are able to stop in the required distance, he said.

In strength tests, the panels can hold 250,000 pounds, three times the legal limit for a semitrailer.

They are made of tempered glass, weigh about 70 pounds each and contain lights that can be programmed to direct traffic or alert drivers to problems. Each hexagonal panel is about 31 inches point-to-point.

The panels contain microprocessors that allow them to communicate with each other, a central control station and vehicles. They also are designed to be easily replaced if damaged.

The panels can currently be used for sidewalks, driveways and parking lots. The company is still seeking permission from the federal government to use them in roads.

Solar Roadways wants to set up a manufacturing facility for the glass panels in Sandpoint as early as next year.

“We want to get the cost down to where the average homeowner can afford it,” Julie Brusaw said.

For now, the Brusaws are doing custom jobs, but they envision do-it-yourselfers buying the panels at hardware stores.

The next public installations will be in Baltimore and at a Route 66 rest area in Missouri, Scott Brusaw said. Both are surfaces for pedestrians.