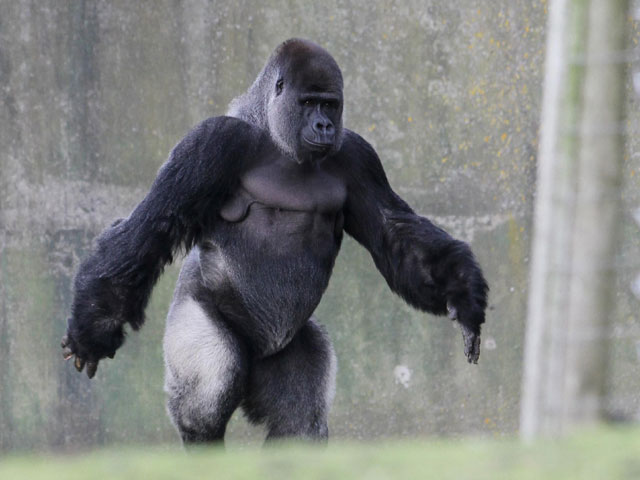 The zoo has posted recorded footage of Ambam, an endangered Western lowland gorilla, waddling around his enclosure, and his video has already been viewed more than 250,000 times on YouTube.

His keeper, Phil Ridges, told Sky News: "His father Bitam used to display the same behaviour if he had handfuls of food to carry. Ambam also has a sister, Tamba, and a half-sister who also sometimes stand and walk in the same way."

While all gorillas and many other primates have the ability to walk upright, most don't.

"We haven't got any who do it like Ambam," Ridges said. "He's quite a celebrity at the park. We think he might use it to get a height advantage to look over the wall when keepers come to feed him and standing up can also help him in looking for food generally. "

"They live in heavy rain forests, and it is difficult for scientists to accurately estimate how many survive in Cameroon, Central African Republic, Congo, Equatorial Guinea, Gabon, Angola, and the Democratic Republic of Congo. Western lowland gorillas tend to be a bit smaller than their mountain cousins. They also have shorter hair and longer arms. Gorillas can climb trees, but are usually found on the ground in communities of up to 30 individuals. In captivity, gorillas have displayed significant intelligence and have even learned simple human sign language."