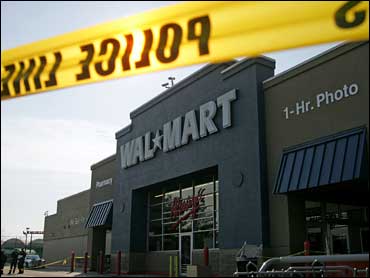 The family of a worker trampled to death in a "Black Friday" crush of bargain hunters at a Long Island Wal-Mart store filed a wrongful death lawsuit on Wednesday, claiming store ads offering deep discounts "created an atmosphere of competition and anxiety" that led to "crowd craze."

The lawsuit claims that besides failing to provide adequate security for a pre-dawn crowd estimated at 2,000, the store "engaged in specific marketing and advertising techniques to specifically attract a large crowd and create an environment of frenzy and mayhem and was otherwise careless, reckless and negligent."

In addition to Wal-Mart, the adjacent Green Acres Mall, a realty company that manages the property and a security firm hired to patrol the property were all named as defendants. None immediately responded to phone and e-mail inquiries seeking comment on the lawsuit.

Attorney Jordan Hecht, who represents the family of Jdimytai Damour - the 34-year-old employee who died of asphyxiation after being crushed by the crowd - said lawsuits are also planned against Nassau County and its police department. County Attorney Lorna Goodman contended: "The county has no liability in situations of this kind."

The lawsuit was filed Wednesday in state Supreme Court in the Bronx, the home of one of the victim's sisters, Elsie Damour Phillipe, the court-appointed administrator of his estate. It does not seek specific damages.

Damour, a hulking 6-5, 270-pound man, had been hired by an employment agency as a temporary worker at the Wal-Mart store and was on the job about a week when he died, the family's lawyer said.

Authorities suspect that because he was as big as an NFL lineman, Damour was placed at the entrance of the store to assist with crowd control. He was killed when the crowd broke down the electronic doors in frantic pursuit of bargains.

"Those hundreds of people who did make their way into the store, literally had to step over or around him or unfortunately on him to get into the Wal-Mart store," Police Commissioner Lawrence Mulvey said earlier this week.

Police are reviewing store video to identify possible suspects in Damour's death, but Mulvey conceded the likelihood that anyone will be held criminally liable is slim.

Alicio Sgro, a 14-year-old who was at the store, told WCBS-2 in New York that one person in line broke her arm in a rage as they waited for the doors to open.

She said police made no arrests and the store had inexperienced people making things worse.

"They had five Wal-Mart employees dressed in normal clothing and the way they were talking to the crowd … they were cursing and acting bad to the crowd," she said.

At least four other people were treated at hospitals, including a woman who was eight months pregnant. Mulvey said it was apparent to him that the Wal-Mart store lacked adequate security to handle the crowds. He said police representatives met with retailers throughout the county two weeks before Thanksgiving and made it clear that security and crowd control for the sales was the responsibility of the merchants.

Shoppers around the country line up early outside stores on the day after Thanksgiving in the annual bargain-hunting ritual known as Black Friday. It got that name because it has historically been the day stores broke into profitability for the full year.

The National Retail Federation believes Damour is the first store worker to die on the job in the post-Thanksgiving rush. A private funeral service is planned, Hecht said.