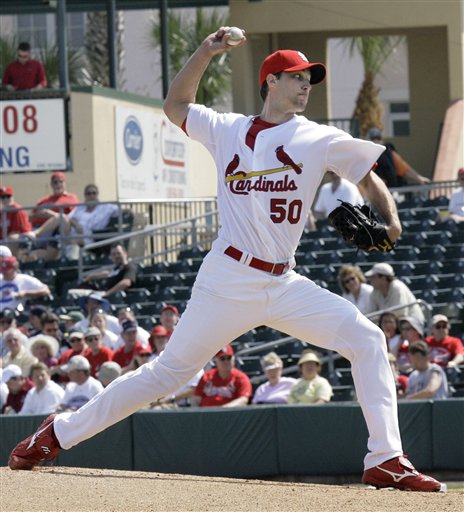 Adam Wainwright is hoping to go from closing games for the St. Louis Cardinals to starting them. The big right-hander, who closed out the Cardinals' World Series win in October, opened his bid for a job in his team's rebuilt rotation with three hitless innings Wednesday in a 6-3 victory over the Florida Marlins.

"I did some things well to get some first-pitch outs, but I did a lot of things I'll need to improve on," he said. "All in all it was a good first time."

The 6-foot-7 Wainwright will likely be a starter this season, unless closer Jason Isringhausen has a setback in his rehabilitation from hip surgery. Wainwright filled in for an injured Isringhausen last October, allowed no earned runs in 9 2-3 postseason innings and saved the clinching games against the New York Mets in the NL championship series and the Detroit Tigers in the World Series.

"It feels like three days away," Wainwright said. "No offseason; I spent a lot of time with these guys. But at the same time, my thinking was it was a million years away. I'm really trying to forget about that."

Wainwright earned the win on the first day of exhibition play between major league teams. He walked one and fell behind several other batters at Jupiter, Fla. But he still needed only 30 pitches _ 15 strikes _ to get through the first three innings, facing 10 batters.

"I thought he was great," manager Tony La Russa said. "He was impressive, just the way he has been since the first day he started throwing down here. I mean, he wants that job."

Former Cardinals pitcher Rick Ankiel, bidding for spot on the roster as an outfielder, went 2-for-2 with a two-run single, but was thrown out at the plate twice.

In Scottsdale, Ariz., Barry Bonds declined to elaborate about death threats the San Francisco slugger says he is receiving.

"We're not going anywhere with that," Bonds said.

The 42-year-old Bonds, 22 home runs from passing Hank Aaron's career record of 755, told San Francisco's KGO Radio on Tuesday that he has been receiving threats.

"There's a lot of times I want to say I'm sorry to some of the fans. You're only strong to a point and then you get nervous," Bonds told KGO during a 90-minute interview. "I'm kind of standoffish and stuff and you can't really explain that. ... I'm mostly gun-shy of what can happen. Once this is all over and done, whether I get lucky enough to do it or not, I'll be able to release just a little bit of the anxiety and fear of what can happen. You don't want anything to happen to yourself. You don't want anything to happen to your family."

In Phoenix, the Oakland Athletics learned outfielder Bobby Kielty needs arthroscopic surgery on his left knee and will be sidelined for three to six weeks.

Kielty, who came to camp in the best shape of his career, injured the knee Sunday during a rundown drill _ and just when he was ready to get through a healthy spring training, for a change.

"It's definitely a bummer," Kielty said. "Right now I could play on it, but we're deciding that the best thing is to make sure it's good for the season."

At Tucson, Ariz., White Sox closer Bobby Jenks threw nine pitches in Chicago's opening spring training game before being taken out against Colorado because of tightness in his right shoulder.

Jenks, who led the White Sox with 41 saves last year and was an instrumental part of Chicago's late season run to the 2005 World Series, was to be evaluated Thursday.

He faced only three batters in a 12-4 loss to Colorado before manager Ozzie Guillen took him out. Jenks doesn't expect to miss any game action.

"There is no pain at all, no sharp pain, just one pitch where it caught right away," Jenks said. "That is why I called Ozzie out there. There is nothing wrong with it. It is just tight. I couldn't get the extension, and I can't accelerate through the ball because I have no range right now."

Jenks is in his econd full year with the White Sox. He said the tightness had been there since he arrived at spring training.

At Fort Myers, Fla., Minnesota's Matt Garza made a strong early impression toward winning a spot in his team's rotation.

Garza, the Twins' minor league pitcher of the year last season, and Boston's Curt Schilling each pitched two scoreless innings in a 4-4 tie in 10 innings.

The Twins nearly took the lead in the ninth, but right fielder Alex Ochoa turned a double play by catching Alexi Casilla's fly ball and throwing out Luis Rodriguez at home after he tagged up. Ochoa, a long shot to make the Red Sox, also threw out a runner at second in the fifth.

At Port St. Lucie, Fla., New York Mets pitcher Oliver Perez hit a Sports Illustrated photographer on a leg with one of his warmup pitches. His control improved, his results did not.

Perez walked only one batter in two innings, but gave up four runs and five hits as the Mets lost 5-4 to the Tigers.

"I got hit pretty good," said the photographer, John Iacono, who was shooting from near the backstop before the game. "At the last minute, I saw it coming. I turned my left leg just enough so I didn't get it head on."

Tigers manager Jim Leyland told Iacono to have trainers look at the leg, which was hit just below the knee. Iacono, who stopped shooting the game after the fourth inning, had about 15 minutes of ice and had the leg wrapped. He said after the game that he wasn't feeling welland might have the leg X-rayed.