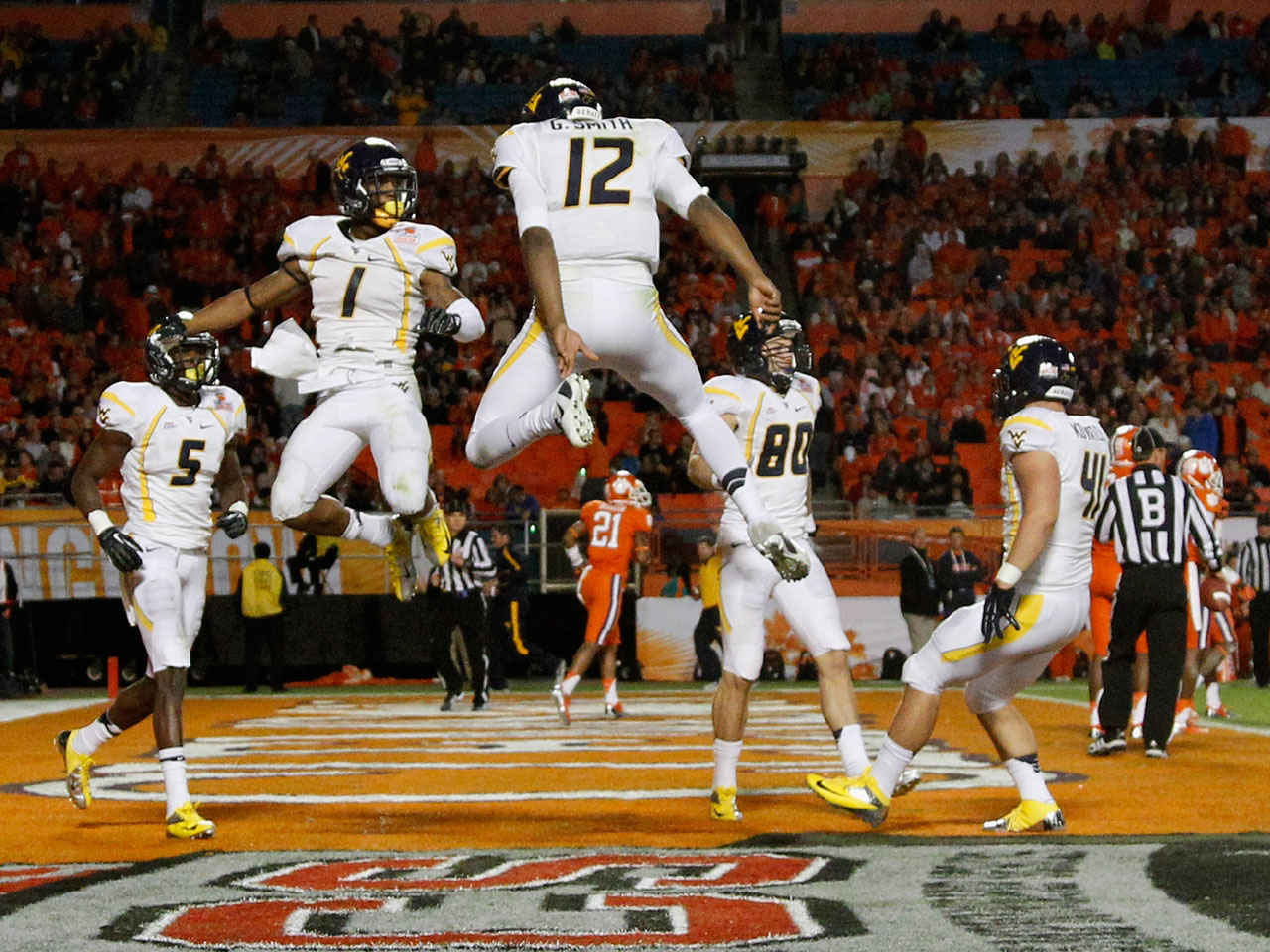 MIAMI - The West Virginia Mountaineers were tough to slow down, and only the Orange Bowl mascot could stop Darwin Cook.

Geno Smith tied the record for any bowl game with six touchdown passes, and the No. 23-ranked Mountaineers set a bowl scoring record Wednesday night with their high-powered offense. But safety Cook made the pivotal play by returning a fumble 99 yards for a touchdown to break the game open and help beat No. 14 Clemson 70-33.

Cook collided comically with mascot Obie after scoring one of the Mountaineers' five TDs in the second quarter, including three in the final 2:29 for a 49-20 lead. It was the highest-scoring half by a team in a bowl game.

The Mountaineers (10-3) won in their first Orange Bowl appearance and improved to 3-0 in three Bowl Championship Series games. Clemson (10-4) lost playing in its first major bowl in 30 years.

The offensive showcase was the latest in a succession this bowl season, and perhaps the last. Defense is expected to dominate in the final BCS game Monday when Louisiana State faces Alabama for the national title.

Tacklers had their hands full — or rather, they didn't — on a chilly night in Miami. Smith and Austin combined on scoring passes of 8, 27, 3 and 37 yards, and Shawne Alston scored on two short runs for West Virginia, which totaled 589 yards and 31 first downs. Smith was chosen the game's outstanding player.

Even when Clemson managed to corral the Mountaineers, the play wasn't always over. Andrew Buie rolled over a defender but was never downed, so he got up and ran for an additional 18 yards.

Clemson couldn't keep up, although Andre Ellington did score the game's first points on a 68-yard run. First-team All-Americans Sammy Watkins and Dwayne Allen combined for only seven catches for 87 yards.

Amid the flurry of points, it was a defender who came up with second-longest scoring play in Orange Bowl history.

Clemson was on the verge of taking the lead in the second quarter when Ellington ran up the middle and disappeared into a heap at the 1. A teammate signaled touchdown, but the ball came loose and Cook grabbed it, then took off with nothing but the end zone in front of him.

After Cook crossed the goal line, he gleefully leaped on mascot Obie, a smiling orange, and they both tumbled to the turf. Obie rose unhurt and resumed her duties, while the potential 14-point swing seemed to deflect the Tigers, who had moved the ball almost at will to that point.

Subsequent turnovers by quarterback Tajh Boyd on consecutive Clemson plays doomed the Tigers. After Smith ran 7 yards on a keeper for a 35-20 lead, Pat Miller intercepted Boyd's pass. Smith flipped a 1-yard touchdown pass to Austin and, on the next play, a call was overturned, with the replay official determining Boyd had lost a fumble.

Alston then ran for a 1-yard touchdown with 4 seconds left in the half.

Defensive woes were nothing new for the Tigers, who won their first Atlantic Coast Conference title in 20 years but gave up at least 30 points in six regular-season games.

Clemson kept pace for a while, leading 17-14 after one period. It was the highest-scoring first quarter and first half in Orange Bowl history.

West Virginia went ahead for the first time early in the second period on an 80-yard touchdown drive capped by Austin's 27-yard catch, making the score 21-17. Cook's takeaway touchdown came next, and the Mountaineers were off to the races.