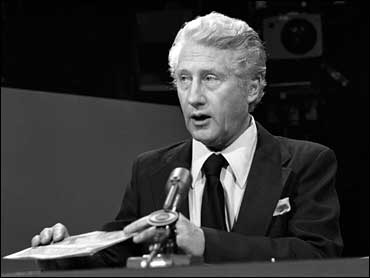 The former FBI second-in-command who revealed himself as "Deep Throat" 30 years after he tipped off reporters to the Watergate scandal that toppled a president has died.

The shadowy central figure in one of the most gripping political dramas of the 20th century, Felt insisted his alter ego be kept secret when he leaked damaging information about President Richard Nixon and his aides to The Washington Post.

Some speculated that Felt was the source who connected the White House to the June 1972 break-in at the headquarters of the Democratic National Committee. He steadfastly denied the accusations until finally coming forward in May 2005.

In the last week of November, the National Archives released more than 10,000 pages of documents from the Nixon presidency, among them were the urgings of past and present FBI agents and other interested citizens to appoint Felt, then the No. 2 FBI official, as director. Associates described his "outstanding loyalty."

Nixon did not take the advice.

Nixon, soon to be consumed by the Watergate investigation, passed over career agents including Felt when he selected loyalist L. Patrick Gray as FBI chief after the J. Edgar Hoover's death in 1972, just weeks before the Watergate break-in. Gray resigned the next year because of allegations he had destroyed Watergate documents.

Felt's supporters weighed in, with letters, telegrams and cards that have been in Nixon's White House files all these years.

"He has the integrity, the ability, the experience and the image to insure that our FBI will continue to deserve and maintain world esteem," Harold L. Child Jr., legal attache to the embassy in Japan and a 30-year FBI veteran, told Nixon in an April 1973 letter.

Efton A. Stanfield, a former FBI special agent who was then an executive of the electrical contractors' association, asked Nixon in a telegram to turn to the career professional to replace Gray.

"Mr. Felt is a man of outstanding loyalty, character, reputation, habits," he said. The "fidelity, bravery, and integrity of Mr. Felt are unquestioned."

Felt himself was the lead agent in a telegram sent to the White House by a group of agents asking that a highly qualified professional be nominated. The police chief in Kodiak, Alaska, made the case for Felt, and so did ordinary citizens.

Writing from Brooklyn, N.Y., Viena K. Neaville told Nixon that choosing Felt would be good for him because, "You would be spared the tremendous aggravation to which you are subjected by so many factions."

Nixon was spared no grief. He eventually chose William Ruckelshaus, who served at FBI only briefly.

Deep Throat's identity remained a mystery until Felt stepped forward in 2005 to acknowledge his clandestine role in bringing down Nixon.

Bob Woodward of The Washington Post said he first spoke with Felt about Watergate two days after the break-in.