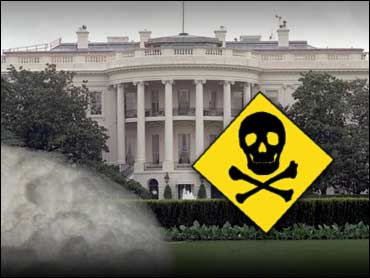 The discovery of ricin in a Senate office building this week is the third known incident involving the deadly toxin in the United States since October.

The White House was an earlier target, a law enforcement official revealed.

Three Senate office buildings remained closed Wednesday after a white powder determined to be ricin was found in an office of Senate Majority Leader Bill Frist on Monday, a little more than two years since Congress grappled with another potentially lethal toxin, anthrax.

Unopened mail is being collected throughout the Capitol complex by investigators searching for letters that could be contaminated.

Meanwhile, a law enforcement official revealed that another letter containing ricin and bound for the White House had been intercepted in November. In October, a ricin-laced letter was found at a postal facility serving Greenville-Spartanburg International Airport in South Carolina.

No illnesses or arrests have been reported from any of the incidents. They come months after the FBI warned that terrorists might use ricin, and just over two years after the anthrax letter spree that killed five and remains unsolved.

According to The Washington Post, the FBI is considering whether the ricin letters are connected to the 2001 anthrax attacks.

On Wednesday, tests were ongoing on the ricin found by a young worker in Frist's fourth-floor mailroom in the Dirksen Senate Office Building. Authorities want to learn whether it was sufficiently potent and in a powder fine enough to kill people.

Even without final test results, House Speaker Dennis Hastert said, "It's serious enough that they're picking up everybody's mail."

President Bush was briefed on the situation, and the administration established an interagency team to investigate the incident.

No illnesses had been reported by late Tuesday, said Dr. John Eisold, the Capitol physician. Tests of air filters showed the chemical had not circulated through the buildings' ventilation systems, said Senate Democratic leader Tom Daschle of South Dakota.

Health experts expressed optimism that casualties would be averted in the new attack. "As each minute ticks by, we are less and less concerned about the health effects," said Dr. Julie Gerberding, director of the Centers for Disease Control and Prevention in Atlanta.

But dozens of Senate workers were being monitored and health officials urged Senate staff to watch for swiftly developing fever, coughs or fluid in the lungs over the next two or three days. When inhaled in sufficient quantities or injected, ricin can be fatal — and there is no known vaccine or cure.

The postal facility that processes Congress' mail also was shut. In 2001, two postal workers in Washington were among five people who died from anthrax exposure.

Senators debated a highways bill Tuesday, but votes were canceled. Frist said voting in the Senate would resume Wednesday, but that all three Senate office buildings would remain closed, perhaps all week.

The letter or package that might have carried ricin into Frist's office had not been identified, investigators said. No extortion, threat or complaint letter had been found in the office, said a second law enforcement source, also speaking on condition of anonymity.

The ricin-laced letter addressed to the White House in November had been detected at an offsite mail processing facility, the law enforcement official said, speaking on condition of anonymity. Authorities determined the letter posed no threat to health because of the ricin's low potency and granular form.

The letter was similar to another letter containing ricin that showed up in October at the postal facility serving Greenville-Spartanburg International Airport, according to a senior law enforcement official, speaking on condition of anonymity. The author of both letters complained about new regulations requiring certain amounts of rest for truck drivers, the official said.

There was widespread agreement among lawmakers that Congress responded more effectively this week than to the anthrax-laced letters that were sent to two senators in 2001.

But even Frist acknowledged that things were "not perfect." Chief among senators' complaints were that authorities were too slow to alert them.

"We weren't notified promptly enough yesterday," said Sen. Tom Harkin, D-Iowa, who said one of his aides worked well into the evening in the Dirksen building. "But that's OK. People make mistakes."

One aide who was quarantined said many co-workers had already gone home. This aide said those quarantined were asked to telephone colleagues who had left and tell them to shower and put their clothes in a bag.

Senate aides said 40 to 50 people were quarantined and decontaminated with showers, although Frist's office said the number was 24, plus an uncertain number of Capitol police officers who took precautionary showers after their shifts.

"There was something specific about this that made them worry," Graham said. "Somebody knew what they were doing. … Frist said the type, the way it was presented indicated that people understood it goes into the air and gets into lungs."

Powder found in an envelope at a mail processing center in Wallingford, Conn., where anthrax was discovered in 2001 has tested negative for ricin and appears to be wood ash, officials said Tuesday night.

People exposed to ricin can protect themselves in two ways — leaving the area to breathe fresh air and getting rid of any of the toxin that might be on the skin.

Last January, the FBI told police to beware of possible attacks using ricin, a toxic substance derived from the castor bean plant. That warning followed the arrests in 2002 in Britain of 11 North African men on terrorism charges stemming from an alleged attempt to develop a ricin weapon.