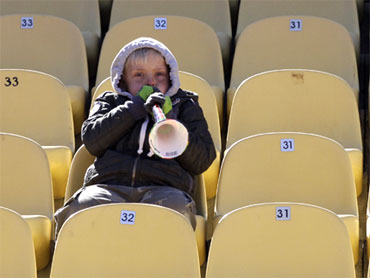 UEFA has banned fans from bringing vuvuzelas into stadiums for European Championship and Champions League matches.

UEFA said Wednesday it wanted to protect the culture and tradition of fans singing at European soccer matches from the "negative effect" of the South African plastic trumpets made famous - and notorious - at the World Cup.

"UEFA feels that the instrument's widespread use would not be appropriate in Europe," the organization said in a statement.

All 53 European soccer nations have been told to enforce the ban at UEFA's national team and club competition matches.

Vuvuzelas provided the World Cup soundtrack in South Africa, where every match was accompanied by a low-pitch drone likened to a swarm of buzzing bees.

FIFA refused to ban vuvuzelas despite repeated calls from players and broadcasters, defending them as part of South African soccer culture.

However, they have since been banned by organizers of events such as basketball's world championship and the Little League World Series, and by most English Premier League clubs.

Europe's soccer authority acknowledged Wednesday that the vuvuzela had a place in world soccer culture.

"In the specific context of South Africa, the vuvuzela adds a touch of local flavor and folklore," UEFA said, before adding that they would change the traditional atmosphere at European matches.

"The magic of football consists of the two-way exchange of emotions between the pitch and the stands, where the public can transmit a full range of feelings to the players," UEFA said. "UEFA is of the view that the vuvuzelas would completely change the atmosphere, drowning supporter emotions and detracting from the experience of the game."

The ban will take effect when qualifying for Euro 2012 begins on Friday, and when the group stage of the Champions League and Europa League starts in two weeks.

European broadcasters, who developed sound filters during the World Cup to try to control the vuvuzela noise, will likely be pleased by the ban.

Valuable television rights deals help to ensure that the Champions League earns more than $1.28 billion in commercial revenue each season.

FIBA called vuvuzelas "controversial instruments" when it banned them from the basketball world championship, which is being played in Turkey.

FIBA cited medical advice that the 120-decibel noise in indoor arenas could permanently damage the hearing of players and spectators, and have a "direct negative impact" on the game by making it difficult for referees to communicate.