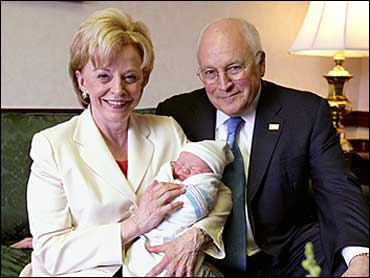 Samuel David Cheney was born at 9:46 a.m. at Sibley Hospital in Washington, the vice president's office announced. Vice President Cheney and his wife, Lynne, paid a visit to their new — and sixth — grandchild a few hours later.

Mary Cheney announced in December that she and Poe had decided to start a family. Her decision to become pregnant and raise a child with Poe was criticized in some conservative circles. James Dobson, founder of Focus on the Family, asserted that children need to be reared by heterosexual married couples, for instance.

The vice president bristled at questions on the topic.

Mary Cheney was an aide to her father during the 2004 campaign and now is vice president for consumer advocacy at AOL.