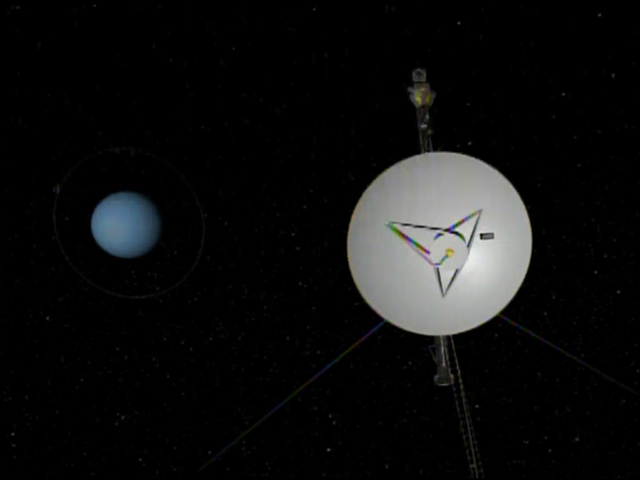 (CBS News) PASADENA, Calif. - You don't see many cars that were manufactured in the 1970s still on the road. But a spacecraft from that era just keeps on going, traveling through the heavens at 38,000 miles an hour.

Voyager 1 has been hurtling through space for 35 years. Now 11 billion miles from the sun, it's approaching the outer limit of our solar system.

"We're on a journey to the edge of the bubble the sun creates around itself. Outside is interstellar space," said lead scientist Ed Stone, who signed on for a mission planned for five years.

Over the decades, Stone has run NASA's Jet Propulsion Laboratory, taught at Cal Tech, but he never left Voyager behind. He's still excited about the mission.

"It's a great mission," he said. "I've been very fortunate to have been on it right from the beginning."

Voyager 1 and its sister craft, Voyager 2, were launched in 1977. The mission: to get a close-up look at our solar system. The technology is decidedly old school.

Each craft carries a gold disc with the sights and sounds of Earth. The protective plate instructs intelligent aliens who might find it to play it like a '70s record album. Incoming data is recorded on an 8-track tape -- today's smallest iPods have 100,000 times more memory. The old technology made many new discoveries.

"Before Voyager, the only known active volcanoes were right here on Earth, and then we found a moon of Jupiter called Io, which has ten times more volcanic activity," said Stone.

Voyager found Jupiter's big red spot was just one of dozens of massive storms on the giant planet. The wondrous rings of Saturn are actually thousands of tiny bands of ice and debris. Voyager then turned the cameras around and showed us what we look like from millions of miles in space.

As far as where Voyager falls in that pantheon of space marvels, Stone said: "This mission probably has had more discoveries than any other planetary mission ever had, because it's seen so many different worlds."

To conserve the plutonium power source, Voyager's functions slowly are being shut down.

"By 2025, we will have to turn off the last instrument and that will be the end of the science mission," said Stone, "and the two spacecraft will then forever orbit the center of our galaxy silently."

Everyday, Voyager extends man's reach farther than ever before.