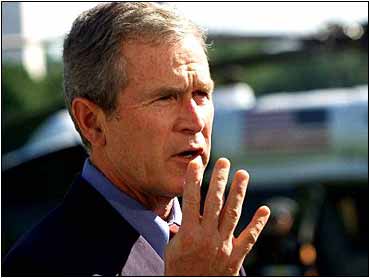 President Bush pledged Sunday that the United States "will rid the world of evil-doers."

He told Americans, who begin a new week in the aftermath of last week's terrorist attacks: "Tomorrow when you get back to work, work hard like you always have."

"My administration has a job to do. And we're going to do it," Bush said upon his return to the White House from a weekend at the presidential retreat at Camp David.

Bush said those who carried out the attacks on "buildings filled with innocent people" in New York and Washington "have declared war on America. They've made a terrible mistake."

He brushed off a statement attributed to Osama bin Laden denying a role in the attacks on the World Trade Center and Pentagon. "No question, he is the prime suspect. No question about that," Bush said.

Vice President Dick Cheney said Sunday that the United States would track down fugitive terrorist Osama bin Laden and warned that nations that sheltered him face "the full wrath of the United States." He identified Afghanistan as a likely target.

Cheney, appearing in public for the first time in days, also warned on NBC's "Meet the Press" that Americans face a battle against terrorism that could take a "long time, probably years."

"What we are going to do is aggressively go after Mr. bin Laden, obviously, and all his associates. And even if it takes a long time, I'm convinced eventually we'll prevail," Cheney said from the presidential retreat at Camp David.

Top administration officials rule out any immediate need for a military draft. "The armed forces are strong... without with considering reinstitution of the draft," Secretary of State Colin Powell said on the CBS News broadcast Face the Nation.

Almost all 18-year-old men are required to register with selective service. If this or any crisis required a draft, a random lottery based on birth dates would determine the order of induction.

A day after Bush called bin Laden a prime suspect in last week's terror attacks in New York and Washington, Cheney presented what amounted to the administration's most specific indictment yet of both the Saudi exile and Afghanistan.

Cheney said the United States would retaliate "if you've got a nation out there now that has provided a base, training facilities, a sanctuary, assets." Afghanistan fits that description, he suggested.

"I have no doubt" that bin Laden's organization was involved in the attacks, Cheney said.

He said there was no way to know for sure whether bin Laden was still in Afghanistan, and that a threat could remain.

"The possibility truly exists that there could be additional terrorists out there," he added.

Cheney said there was no evidence to link Iraqi President Saddam Hussein to the attacks by sucide hijackers on the World Trade Center and the Pentagon that left thousands dead.

Bin Laden, 44, who is believed to have launched his campaign against the United States in retribution for "desecration" by U.S. troops during the 1990-91 Gulf crisis, denied responsibility for the attacks.

"I am residing in Afghanistan. I have taken an oath of allegiance (to Afghanistan Taliban leader Mullah Mohammad Omar) which does not allow me to do such things from Afghanistan," bin Laden was quoted as saying in a statement provided by a political aide to the Afghan Islamic Press Sunday.

Afghanistan's hard-line Taliban movement Sunday reaffirmed its position of allowing bin Laden to remain in the country as its "guest." It called on Islamic clerics to gather in the capital, Kabul, for an urgent meeting to discuss the defense of the country.