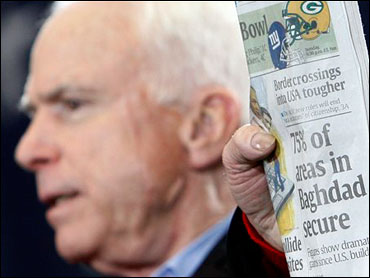 Aaron Small is a retired fire official here in South Carolina who voted for George W. Bush in the 2000 Republican primary. Today, he is at a rally for John McCain, convinced that McCain is the right man to fight the war on terror and fix the health care system. "We just need to get our country turned around," Small tells me as we wait for McCain to speak in a chilly enclosed tent in the parking lot of McCain's Columbia headquarters. I ask Small whether, looking back with all he knows now that he couldn't have known in 2000, he did the right thing in choosing Bush over McCain.

"Well, I hope I did at the time," Small, a native South Carolinian, tells me. "If we could change things, certainly I would vote differently -- as much as I respect our president."

Small is like a lot of Republicans here at this rally and in South Carolina as a whole. I talk to several of them after McCain speaks, and all profess great regard for George W. Bush, mixed with the hope that they didn't make a mistake by voting for him in 2000 and a determination to support McCain this time around.

"There wasn't a war going on in 2000 that we worried about," Maxine Heifner tells me. She and her husband George retired to South Carolina from Michigan, where they voted for Bush in the 2000 primary. "It was totally different, a different campaign." I ask whether she thinks her vote for Bush was the right thing to do. "Who knows?" she answers. "You can never say what would have happened if you went the other way. The first four years, I was very satisfied with Bush. I was not against him going into Iraq. But I was against him not being prepared for what came up. I think McCain would have been much more prepared."

John Courson is a state senator from Lexington and Richland counties. A natural raconteur, he warms up the crowd before McCain appears -- actually, he stalls for time, introducing speaker after speaker to make up for McCain's lateness. He's a solid McCain man today, but in 2000 he was a solid Bush man. Did he make the right decision back then? Courson's answer is a primer in the personal side of politics.

"It's more complicated than that," he tells me. "I was very involved with Reagan, a national delegate, presidential elector, and national committeeman when he was president. Bush was the natural heir to the Reagan movement. I supported his father, and I supported him. I met him in his dad's campaign in 1988, and we traveled together. We're both baseball nuts, and when we would get together we would talk about baseball all the time. It was a personal relationship more than anything else. Without that personal relationship, I'd have been for John McCain then, because of the military component. I was in the Marines, and I have tremendous admiration for him."

"Do you think McCain would have been a better commander-in-chief?"

"Yes, I do," Courson quietly tells me. "Absolutely."

When voting begins tomorrow, John McCain's name will be on the ballot along with Mike Huckabee, Fred Thompson, Mitt Romney, and Rudy Giuliani. But in the minds of many South Carolinians, a vote for McCain is a chance to re-do their votes for George W. Bush. Like Aaron Small, they still respect Bush. But sometimes they have their doubts…

In addition to the top money-men, this time around, the state's three most important newspapers -- The State in Columbia, the Greenville News, and the Charleston Post and Courier -- have all endorsed McCain. Two of those papers, The State and the News, endorsed Bush in 2000. They don't say they were wrong then, but at the very least they believe McCain's turn has come.

McCain's supporters often point out that he got 42 percent of the vote in South Carolina in 2000. That would be phenomenal in today's crowded field, but of course Bush got 53 percent. And among Republicans in 2000, Bush clobbered McCain, 69 percent to 26 percent. Back then, McCain did much to hurt his own cause with the GOP. Remember that he openly courted non-Republicans -- "I say to independents, Democrats, Libertarians, vegetarians, come on over," he said many times. He accused Bush of "twist[ing] the truth like Clinton." And he seemed downright dismissive of Christian conservatives.

All that, plus those valuable personal connections on the Bush side, added up to victory for George W. Bush. But that was before September 11, before the rocky road of Bush's presidency. Now, some of those Republicans who supported Bush look back and wonder what might have happened had it worked out the other way. It's too late to change, but Saturday's vote will give them another chance with John McCain.
By Byron York
Reprinted with permission from National Review Online