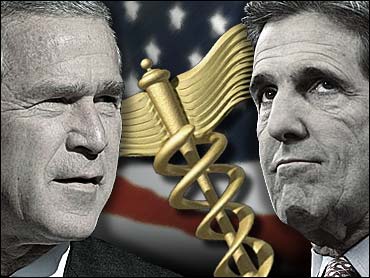 Researchers say expressing your right to vote may help promote good mental health and, in turn, good physical health, but some people will likely benefit from voting more than others.

"In a close election, like this one, the sense that you can make a difference becomes more pronounced. After 2000, people are thinking that their vote may actually count," says Lynn Sanders, PhD, associate professor of politics at the University of Virginia. "That transforms the act of voting to one that is more like the act of protest or fighting."

When you believe you're doing something that could make your life better, that's where the psychological benefits come in, says Sanders, and all of the additional physical benefits attributed to voting are connected to those mental health benefits.

Admittedly, researchers say voting and better health are not directly related. For example, casting your vote on Nov. 2 is not going to lower your cholesterol or cure cancer.

But there are several studies that show being a politically active member of a democratic society can benefit your health in ways beyond determining the government's role in the health care system.

The usual health advice comes in the form of familiar phrases like "take this pill," "eat more fruits and vegetables," or "figure out a way to reduce your stress."

But psychologist Marc Zimmerman says part of the overall picture of good health is to learn how you can empower yourself so you can have some control over the things in life that are under your control, such as voting.

Voting may also provide bigger health benefits to those most at risk.

Sanders recently completed a study that shows voting may help ease the psychological stress and other mental health problems that stem from being economically, politically, or socially disadvantaged.

"I think that people who are on the wrong sides of the disadvantage divide, measured according to anything — health, income, quality of community, or job status — those are the people who stand to benefit most," says Sanders.

Her study also shows that voting and being engaged in the political process can reduce the risk of future psychological problems, especially among those with a history of depression.

Sanders says psychologists have long linked community involvement with psychological well-being, and her study supports that notion. But she says the combative nature of politics may actually be more beneficial to mental health for those who have the most to gain.

Kids Can Benefit From Voting, Too

The health benefits of voting also aren't limited to those old enough to enter a voting booth. Researchers say children and adolescents can benefit from discussing political issues.

"Having parents engage kids in how they're thinking about voting and expressing their right to vote is helpful for kids to prepare them for that piece of being active, engaged citizens in our country," says Zimmerman.

Research also shows that children who are engaged in their community are less likely to experiment with risky behaviors, such as drugs and violence.

"Parents don't realize that even though kids can't vote they can learn about the voting process and learn about how their parents think about different issues," says Zimmerman. "There is also some evidence that talking about politics may help kids become better critical thinkers and help parents build communication patterns with their kids."

Zimmerman says many parents shy away from talking about politics at home, but that may inadvertently send the message that politics and voting aren't important.

If children can't relate to Medicare or social security issues, Zimmerman says parents can get their children interested by talking to them about issues that affect them closer to home, such as school board elections or funding for a new park nearby.

Parents can also offer to take their children with them to their local polling station on Election Day to see democracy in action.

"The more we can model this kind of critical and analytic thinking, the better off we'll all be because will have kids who are more prepared to think in those ways, which is what it takes to search the Internet as well as read something and decide if this is what you believe or not," says Zimmerman.

Win Or Lose, It's Voting That Counts

Researchers say that whether your candidate wins or loses, there's evidence that having voted can help you cope with the results.

"Of course it's better if you win," says Sanders. "There will be a stronger positive effect. But my bit of evidence shows there is still a positive effect from voting."

Zimmerman agrees and says that even if you don't end up with the outcome you wanted, having an opportunity to make your opinion known by voting is beneficial for people psychologically.

"We find people are happier with the outcome and they feel more in control of their lives, if they voted," says Zimmerman. "That is better for their psychological functioning than feeling that whatever they do doesn't matter anyway."

But in the end, psychologists say that no matter who wins, the results of a presidential election are unlikely to have a major impact on people's mood or mental health, despite what people may predict before the election.

"I might think that I will be terribly upset for the next four years if George Bush is re-elected," says Drew Westen, PhD, professor of psychology and psychiatry at Emory University in Atlanta. "But in fact I will probably feel not much different in the next four years than I have felt in the last four years or in the four years before that.