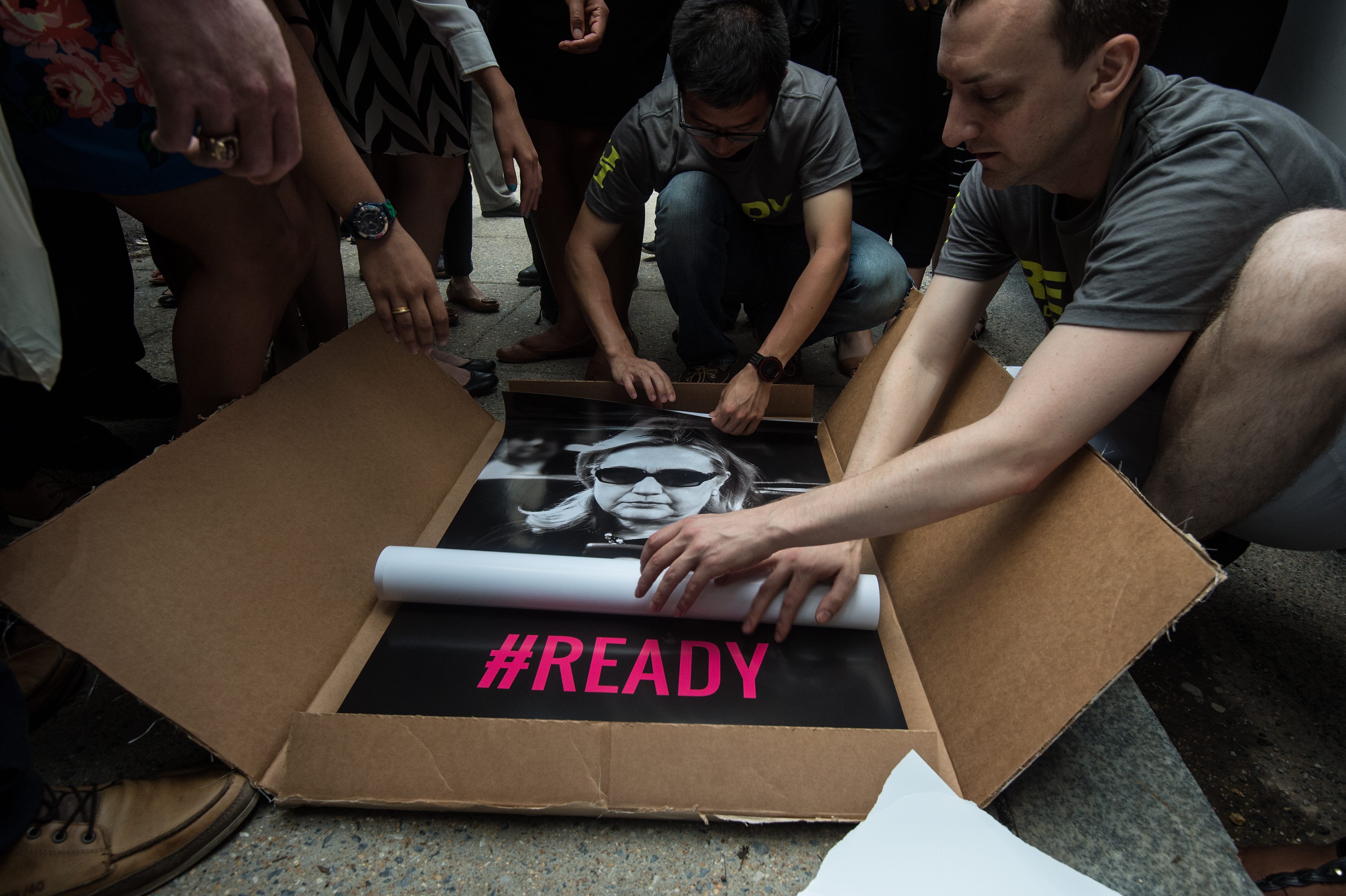 Hundreds of die-hard Hillary Clinton fans gathered at a nightclub in Washington, D.C. on Thursday night, showing their support for her presumed presidential candidacy with a small donation of at least $20.16 to the "Ready for Hillary" PAC.

In return, supporters had the chance to grab some Hillary swag -- including a giant poster of the former secretary of state coolly peering down at her BlackBerry through her dark shades. Underneath the now-iconic image, the poster announced: #Ready.

While the public may never see some of the emails Clinton perused on that BlackBerry, her most strident supporters say it doesn't matter to them -- they're still ready for Hillary, and they're ready for whatever attacks Republicans will throw at her.

"If anything, it comments on how scared the other side is of Hillary Clinton [running] a presidential campaign," he continued. "They're going to try to latch onto anything to take her down. If Republicans are going to try to tear her down, it just makes me that much more supportive of her."

One new Gallup poll suggests that, so far at least, the email controversy isn't really hurting Clinton's public standing. She still has a notably higher favorable (50 percent) than unfavorable (39 percent) rating, while 89 percent of Americans are familiar enough with Clinton to have an opinion of her -- more than any other potential 2016 presidential candidate. The poll was conducted March 2-4, just as the email issue was coming to light.

Several of the attendees at Thursday's fundraiser, like Clark, told CBS News that they're convinced Clinton has acted transparently as a public servant. Furthermore, they argued that as a former first lady often at the center of GOP attacks, Clinton was uniquely justified in using a private server to store her emails while serving as secretary of state.

"Not everybody's married to a former president of the United States, or would have the security issues that she would, or would have Ken Starr in her background," Clinton supporter Michelle Loggins told CBS. "With those things in mind, I see no problem with it."

Loggins chided the politicians calling for further investigations into the private emails that Clinton deleted from her account. "Move on to something that really matters to me and my family," Loggins said.

Joan Fuchsman, who's been "ready for Hillary" since 2008, similarly said the email controversy was overblown.

"It doesn't concern me at all that she kept them in a private server," she said. "For all I know, that could be more secure. Everything is getting hacked these days -- if Sony was hacked, for all I know, the State Department could be hacked."

Clinton supporter Michael Grier said he expects the email controversy to "fade away," though he expects the harsh scrutiny of his preferred candidate to continue.

"There are going to be some people who ask some really tough questions, and I encourage them because I know she's ready for them."