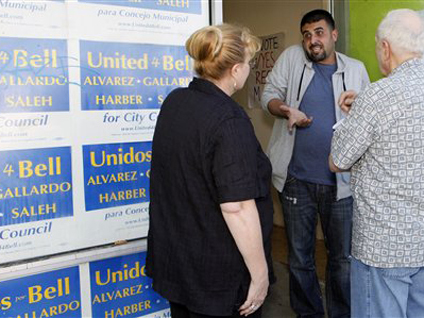 BELL, Calif. - It was a scandal, residents frequently complained, that made their modest Southern California city the laughingstock of the nation.

In the end, however, it was the voters of the gritty, working-class suburb of Bell in the shadow of Los Angeles who had the last laugh.

They stormed their polling places in huge numbers Tuesday and threw out the entire City Council after most of its members were charged with fraud.

"It's a beautiful new day in Bell," said Alberto Alvardo, flashing a wide smile as he stood behind the meat counter of his El Nuevo Mundo market on Wednesday.

For 52 years, the white-haired Alvarado has done business in Bell, which he also calls home. It was only during the past few years that he saw his property taxes and business license fees begin to rise every year, until his taxes topped those of people in Beverly Hills.

Then police began ordering his customers' cars to be towed right out of his parking lot.

It was all part of a scam, authorities say, to keep money flowing so officials could pay themselves six-figure salaries and loan themselves millions more that they paid back by cashing in exorbitant amounts of vacation time.

Former City Manager Robert Rizzo, who is accused of masterminding the scheme, had an annual salary and compensation package of $1.5 million a year. Four of the five City Council members paid themselves $100,000 a year to meet about once a month.

When the salaries became public last summer the entire town revolted. Thousands attended a City Council meeting where they angrily berated officials for hours, telling them relatives from Mexico to the Midwest had been calling them to ask what the hell was going on in Bell.

Then they launched a recall.

Their efforts came to fruition Tuesday when more than 30 percent of Bell's registered voters, about twice the number who cast ballots in the City Council election two years ago, went to the polls.

Ninety-five percent cast ballots to kick out the four City Council members who had made the large salaries. The fifth council member, Lorenzo Velez, who had taken only a modest salary of $7,500 a year and was not arrested, lost his bid for re-election.

Among those elected were businessman Ali Saleh, and Nestor Valencia, a health care administrator. Both had run for City Council before and had railed against abuses at City Hall for years, but their complaints were all but ignored until the salary scandal broke.

"Ali probably would have won the last time if the city administration hadn't gone after him," Alvarado said with disgust. "He was too honest for them."

Saleh, a U.S.-born citizen of Lebanese heritage, was linked to Islamic terrorists in anonymous campaign fliers circulated during the previous election. Equally outrageous claims were leveled against Valencia who, like Saleh, grew up in Bell.

Also elected was Violeta Alvarez, a social worker and first-time candidate who said she had watched in dismay as her city deteriorated over the years. Danny Harber, a retired baker and 40-year resident, and attorney Ana Maria Quintana, a Bell High School and Yale graduate who only recently returned to her hometown, were also elected.

As the newcomers celebrated their victory Wednesday, former City Manager Robert Rizzo, Assistant City Manager Angela Spaccia, former Mayor Oscar Hernandez and former Councilman Luis Artiga were in court for an ongoing hearing to determine whether they will stand trial on dozens of fraud and other counts related to the bilking of the city.

Hernandez, Artiga and four other former council members were ordered last month to stand trial on dozens of separate charges.

Meanwhile, at a community center adjacent to City Hall, and throughout Bell's downtown business district and on residential streets all over town, there was a feeling of jubilation about the election.

Few people could say exactly what they wanted their new leaders to do, other than not rip them off.

"Get rid of the graffiti and stop towing everyone's cars," 20-year resident Jesus Arias said as he stopped to buy lottery tickets at a convenience store.

The Department of Justice is investigating allegations that police illegally had the cars of young Hispanic men towed as part of a city fundraising scheme that Alberto Alvarez said even extended to his private parking lot.

"They said they were junkers," he said. "All the cars were junkers to them. Even new cars."

As this was going on, property taxes, business license fees and trash collection fees were going up to keep the salary spigot open.

With those income sources now dried up, officials say Bell faces a budget deficit of as much as $4.5 million.

Saleh said its one of the first things the new City Council will have to address. He acknowledged it could mean laying off employees and slashing salaries, although the people who made the most outrageous salaries have already been fired or taken pay cuts.

"It's a new beginning for our city," he said. "People came out and showed they really want change. Now their elected officials have to work and make sure we earned their vote."