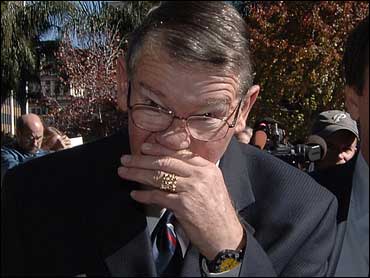 Voters in eight states go to the polls Tuesday, with the most-watched congressional contest the only one that will actually put someone in office — a special election in southern California to replace jailed former Rep. Randy "Duke" Cunningham.

Democrat Francine Busby, a local school board member, has polled even with Republican Brian Bilbray, a former congressman, by focusing her campaign on dissatisfaction with the Bush administration and the GOP-led House.

Democrats hope to win in what has long been a conservative stronghold north of San Diego, and the race is seen as a bellwether for fall midterm elections. Registered Republicans outnumber Democrats 3-to-2.

In addition to the race to replace Cunningham, there are primaries Tuesday for governor in Alabama and California, a Senate seat in Montana and a handful of House contests, among other races.

In Montana, revelations of three-term Republican Sen. Conrad Burns' ties to convicted lobbyist Jack Abramoff have made him one of the most vulnerable members of Congress, inspiring a vigorous contest among Democrats for the right to face him this November. Burns has blamed the "Eastern liberal press" for his troubles and predicted that Montana voters "will make the right judgment call."

The issues in Alabama include tax policy, social conservatism and immigration, as GOP Gov. Bob Riley's failed tax increases have spurred both a Republican primary and a heated contest among Democrats. Former Judge Roy Moore is challenging Riley for the GOP nomination, after gaining social conservatives' notice for his unsuccessful fight to put a Ten Commandments monument in his courthouse.

Among the Democrats hoping to get Riley's job is former Gov. Don Siegelman, who will likely be in federal court on racketeering and bribery charges. His toughest opponent is Democratic Lt. Gov. Lucy Baxley.

Adding intrigue to the state's vote was the fate of Proposition 82, the measure backed by Hollywood director Rob Reiner that would tax the rich to pay for universal preschool. Until late last week the measure held a slight advantage. On Saturday, however, polls showed voters may be turning away from the idea.

California voters also must decide whether they want to keep alive the political career of term-limited Oakland mayor and former Gov. Jerry Brown, who is running for attorney general against Los Angeles City Attorney Rocky Delgadillo.

Among other races that Tuesday's primaries will sort out for the fall: