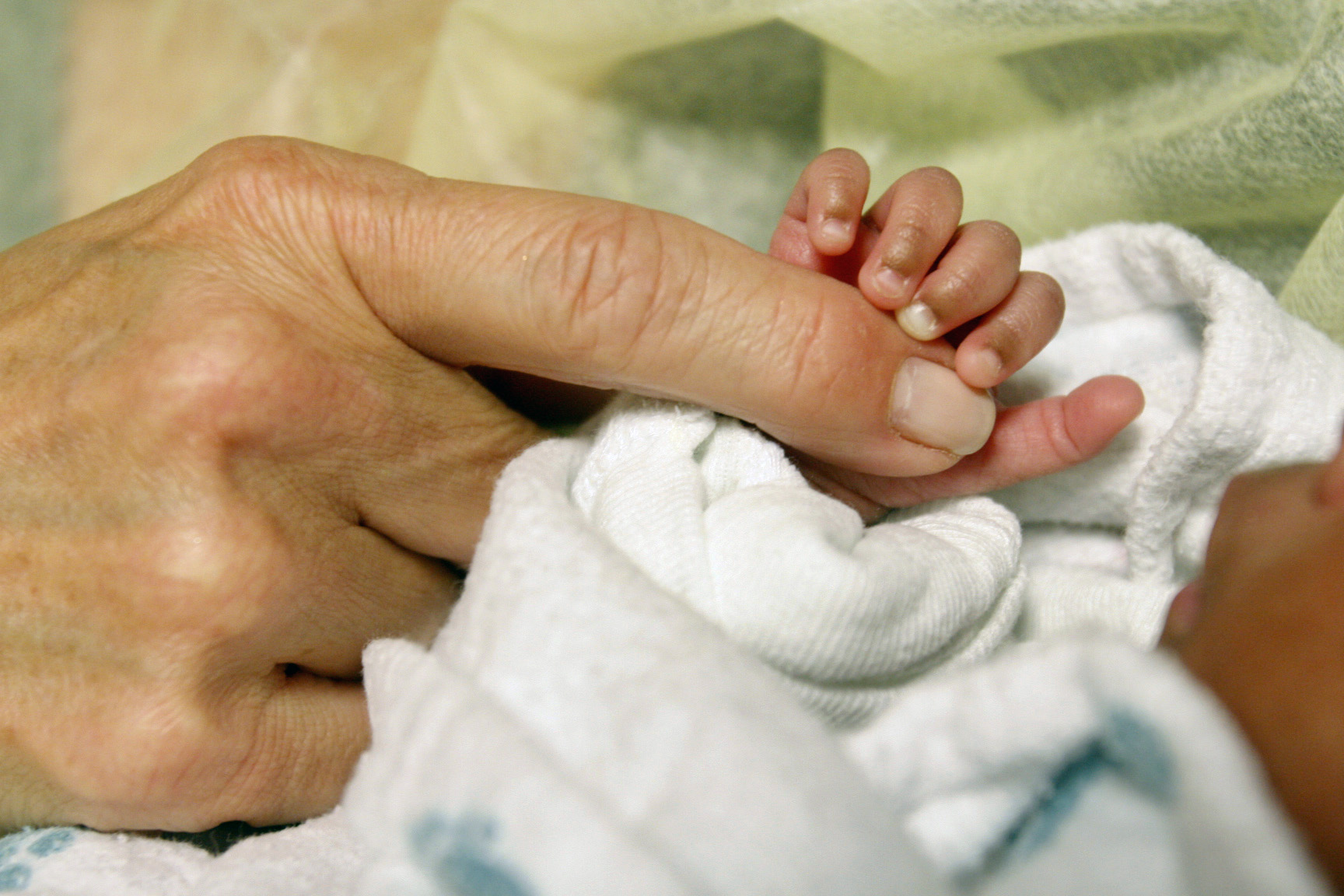 CHICAGO -- Cuddling is being used at hospitals around the country to help premature newborns who can't go home yet.

At the University of Chicago's Comer Children's Hospital, a volunteer slips her arms into a gauzy yellow hospital gown and approaches a medical crib holding a tiny newborn hooked up to noisy machines.

That means cuddle time in the neonatal intensive care unit (NICU). Here, as at several other U.S. hospitals, strangers offer a simple yet powerful service for newborns too tiny or sick to go home.

When nurses are swamped with other patients and parents cannot make it to the hospital, grandmas, empty-nesters, college students and other volunteers step in. They hold the babies, swaddle them, sing and coo to them, rock them, and treat them as if they were their own.

A plaintive cry signals time to get to work.

"You can see them calm, you can see their heart rate drop, you can see their little brows relax," said Kathleen Jones, 52, a cuddler at the Chicago hospital. "They're fighting so hard and they're undergoing all this medical drama and trauma. My heart breaks for them a little bit."

Newborn intensive care units are noisy, stressful environments. There are babies born extremely prematurely, or with birth defects and other illnesses. Some are too sick to be held - but not too sick to touch. Cuddlers reach a finger inside their incubators and stroke tiny bare bellies.

Scientific evidence on benefits of cuddling programs is scarce, but the benefits of human touch are well-known.

A 2008 Canadian study published in BMC Pediatrics showed that cuddling babies born as early as 28 weeks reduced stress levels for them, especially during medical tests, the BBC reported.

Other recent studies have suggested touch may benefit preemies' heart rates and sleep and perhaps even shorten their hospital stays.

The benefit "at the most superficial level" is obvious, he said. "A baby is crying, mom's not there, the nurse is busy with other sick babies, and it's an unpleasant life experience to be crying and unattended to, and, voila! A cuddler comes over and the baby stops crying."

Nancy Salcido has been a cuddler at Torrance for a year. Her two daughters are grown, and she considers her three-hour cuddling shifts good practice for any potential grandchildren.

"I just kind of hold them close to me ... and talk to them, sharing my day, or give them little pep talks," Salcido said. "One of the nurses has nicknamed me the baby whisperer."

Parents typically must consent for their babies to be part of cuddling programs, and cuddlers must undergo background checks and training before starting the job. At Chicago's Comer hospital, that includes lessons in how to swaddle babies tight to make them feel safe and how to maneuver around intravenous lines, as well as instruction in hygiene including frequent hand-washing.


Other cuddling services for preemies exist throughout the country.

Montefiore Medical Center in Bronx, New York has a program that allows staff and medical students to become certified cuddlers.

At the Golisano Children's Hospital in Rochester, N.Y., one cuddler is a young man born there prematurely long ago. He "just wants to come and give back," said Chris Tryon, a child life specialist at the hospital, part of the University of Rochester Medical Center.

Comer's cuddlers include 74-year-old Frank Dertz, a retired carpenter who heard about the program from his daughter, a Comer nurse.

"It's quite a blessing for me. I get more out of it than the babies, I think," Dertz said.

Kathleen Jones says the same thing. A mother of three grown daughters and grandmother of two little girls, she joined Comer's program in 2012, working a couple afternoons a week or sometimes at night.

"They say that I look so in love with them when I'm there, but I cannot NOT crack an ear-to-ear smile whenever I pick that little guy or girl up."

Jones used to wonder why parents or other relatives aren't comforting their own babies. But then, in August, her youngest grandchild was born deaf, with brain damage doctors say was caused by a virus her mom contracted before birth. Evelyn Steadman spent her first three weeks at Comer, and got cuddling care while she was there.

While family members visited often, "life happens and you can't sit by a bedside for three weeks," Jones said.

Erica Steadman had had a C-section, and already had her hands full with a toddler at home.

"She was being held and loved and watched over," she said. "I felt a great sense of relief from that."