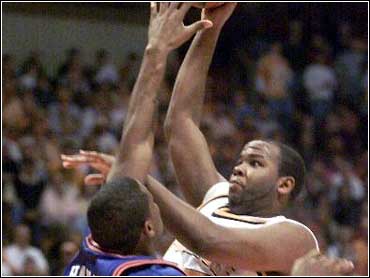 Tennessee's Tony Harris felt the weight of his team on his shoulders, and he was ready to carry the load.

"I had to," Harris said Saturday after leading the No. 8 Volunteers back from a 14-point deficit to force a tie and key a 76-73 overtime victory against No. 12 Florida .

With Florida ahead 63-61 and nine seconds left in regulation, the referees called timeout to review a possession call. Tennessee coach Jerry Green and Florida coach Billy Donovan huddled with their teams. The ball went to the Vols.

"Coach gave me the game plan," Harris said. "Go to the hole and if somebody collapses on you, dish it off. But in the back of my mind, I just wanted to take it upon myself."

Harris took the inbounds and drove the length of the court. His layup with five seconds left tied it at 63, and the Vols and Gators went to overtime.

"Harris got the ball and the Red Sea parted," Donovan said. "We had a good five minutes to talk about it and didn't execute."

Harris, who finished with a game-high 26 points, went on to score nine of Tennessee's 13 points in overtime, including two free throws to ice the victory with five seconds on the clock.

"I tried to control what we could do," Donovan said. "We didn't control Harris."

With a nearly full house of 22,141, Volunteers fans rushed the floor as a 3-point try by Florida's Matt Bonner missed at the buzzer.

The two teams last played two overtimes in a single year in 1984. The Vols won both of those as well.

The Vols relied on the perimeter and guard play, while Florida dominated the front court. The Gators outscored the Vols 52-32 in the paint, while the Vols scored 14 points off fast breaks to the Gators' eight.

Frequently a gentle hook by Gators center Udonis Haslem, who paced Florida with 24 points, answered a driving shot or long-range attempt by the Vols.

"Florida came prepared to play," Green said. "Haslem is a big load inside."

But Harris scored the last 11 points of the half to close Florida's lead to 34-28 at halftime.

A tip-in and 3-pointer by Tennessee's Ron Slay three minutes later sparked a 12-point run as the Vols inched within two at 52-50 with 6:22 left.

Florida kept the Vols at bay until Harris scored the layup to force overtime.

"I wondered if we were ever going to get going," Green said. "but Florida had a lot to do with that."

The Vols and Gators traded baskets and the lead through the overtime period until C.J Black, who finished with 10 points, scored on a putback with 28 seconds left to make it 74-73.

Florida's Mike Miller missed as the shot clock ran down and Tennessee took possession with 24 seconds left. Then Harris scored the two free throws to ice the game.

Black had two blocks, both against Wright, to become the 13th player in the SEC to record at least 200 in a career.

"How big a win was it?" Green said. "It was a win. We need to keep things in perspective."