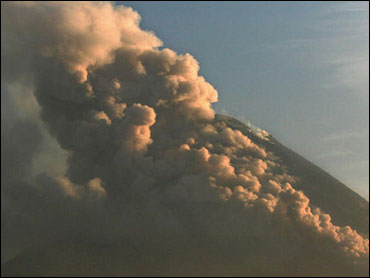 Hundreds of children across parts of Indonesia devastated by last week's earthquake returned to classes Monday to take exams under tents, as local and international aid groups stepped up relief efforts.

The 6.3-magnitude quake struck central Java island on May 27, killing at least 5,782 people, the Social Ministry said, revising its figure downward from more than 6,200 after determining that some victims had been counted twice and others found alive.

Adding to fears in the quake zone, the nearby Mount Merapi volcano spewed hot lava and clouds of gases dozens of times Monday, triggering fresh alerts from the government that a major eruption may be due.

The quake damaged or destroyed more than 130,000 homes and at least 835 schools, the U.N. children's agency and government officials said.

But on Monday, eighth-grade students from at least 10 damaged schools held end-of-year exams in tents, the agency said.

"The pupils are not as cheerful as they used to be," said Nuroh Hidayutun, the head teacher at one of the schools in Serut, as 15 teenagers puzzled over math problems in a gloomy tent. "But keeping up the routine is important."

Across the road, volunteers sang songs with around 35 kindergarten students and gave them drawing lessons. "There is nothing left of our house, so this entertainment is invaluable," said mother Aminiah, who had come to pick up her two children.

About a third of the estimated 647,000 people displaced by the disaster are living in makeshift shelters - often just plastic tarps - with no toilets or running water, surviving of donated food.

Aid agencies stepped up supplies of clean water and latrines, but warn unsanitary conditions could lead to a wave of diarrhea and skin diseases, as well as infecting cuts and breaks sustained in the quake.

The international relief effort has picked up pace in recent days, although aid has yet to reach some remote areas. The United Nations has appealed for US$103 million for recovery efforts over the next six months.

The epicenter of the powerful quake was about 50 miles south of the rumbling Merapi, one of the world's most active volcanos, and its activity has increased since then.

Merapi's lava dome has swelled since the quake to 330 feet, raising fears that it could collapse, officials said. That could send searing-hot clouds of gas and debris pouring down the slopes into inhabited areas.

Authorities have ordered residents in a danger zone to evacuate, but many refused to abandon their livestock and crops.

Indonesia is prone to seismic upheaval because of its location on the so-called Pacific "Ring of Fire," an arc of volcanoes and fault lines encircling the Pacific Basin.