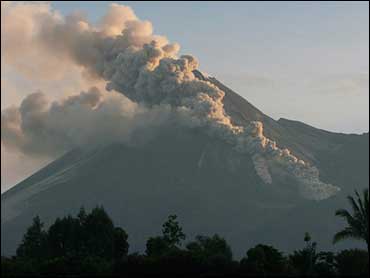 Most of the 647,000 people left homeless are living in makeshift shelters, often just plastic tarps to ward off tropical downpours and the hot sun, with no toilets or running water.

Parji, the 60-year-old owner of one of the coops, told The Associated Press that he wasn't afraid of bird flu.

"There is a slight smell from the dung, but I look after the health of my birds. I am certain there is no bird flu here," he said. No officials had advised them to leave, he said.

Bird flu cases have rocketed in Indonesia in the past month, with some reported in districts surrounding the quake zone.

"We are concerned that people using poultry sheds as shelter are at risk from avian flu and possibly salmonella infection," Dr. Yolanda Bayugo, health director in Indonesia for the British medical aid agency Merlin, said in a statement. She appealed for more tents for survivors.

Activity increased at nearby Mount Merapi, one of the world's most active volcanos, which spewed lava and hot clouds scores of times Saturday, said Subandriyo, a government scientist who uses one name.

Subandriyo said the mountain's lava dome had grown by 56 feet in the past week to reach 330 feet.

That raised fears that it could collapse and release a highly dangerous pyroclastic flow, a fast-moving burst of high-temperature gases and rock fragments that can burn anything in its path, the government volcanology center said.

Scientists say the quake may have also contributed to a weakening of the lava dome.

The government volcanology center recommended that all activities be halted within four miles of the summit.

On Thursday, the mountain's royally appointed spiritual guardian, "Mbah" Maridjan, led a silent procession of 100 people three times around a village near the volcano. Other people prepared ritual offerings.

Merapi, about 250 miles east of the capital, Jakarta, came back to life in recent weeks after years of relative inactivity.

The 9,800-foot volcano is one of the world's most active volcanoes. It last erupted in 1994, sending out a searing cloud of gas that burned 60 people to death. About 1,300 people were killed when it erupted in 1930.

Indonesia is prone to seismic upheaval due to its location on the so-called Pacific "Ring of Fire," an arc of volcanoes and fault lines encircling the Pacific Basin.

It has 76 volcanoes, the largest number in the world.

More than a thousand aftershocks have hit the region since the 6.3-magnitude earthquake struck before dawn a week ago, killing at least 6,234 people and injuring 30,000 more. Officials estimate that 135,000 homes were destroyed.

Most aftershocks have been weak, but one overnight jolted survivors awake.

Two earthquake survivors committed suicide Friday, one by hanging and the other by jumping down a well, Bantul police chief Lt. Col. Dedy Munazat said.

Both men, from different villages, had lost their houses in the quake.

Government officials said 380 people who complained of dizziness and severe stomach pains after eating donated food Thursday were apparently suffering from post-trauma stress. The villagers were treated at four hospitals.

Laboratory tests found that the food was safe, the national disaster agency said.

Thirty more U.S. military medical personnel arrived Saturday on a transport plane, and were followed by a 135-member medical team from Cuba with two field hospitals.

Aid officials say many of the injured people treated by overwhelmed doctors shortly after the quake may have to be re-examined and have broken bones reset or infections treated.

The United Nations issued an urgent appeal on Friday for $103 million to pay for the recovery effort over the next six months, with about half of that for rebuilding homes.

The massive relief effort comes as Indonesia is still trying to rebuild from the 2004 tsunami, which killed 131,000 people in western Aceh province, and is also fighting bird flu.

Local and international aid workers have yet to reach some remote areas, and delivery of food, medicine and tents has been sporadic in others.