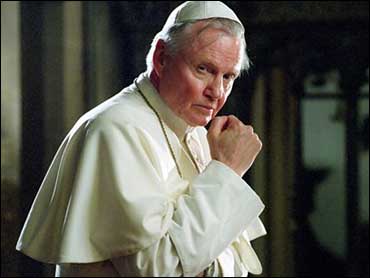 Few network mini-series ever receive a pope's blessing. But Pope Benedict XVI personally screened the new CBS mini-series "Pope John Paul II" at the Vatican and gave it a thumbs up. The mini-series will be broadcast Sunday, Dec. 4, at 9 p.m. ET/PT and Wednesday, Dec. 7, at 8 p.m. ET/PT.

The two-part mini-series stars Jon Voight, who plays Pope John Paul II from age 58 until the end of his life. Voight visited The Early Show to discuss the mini-series with co-anchor Rene Syler.

When Pope Benedict screened the mini-series, Voight was sitting near him. "I was able to watch him a little bit, sneak a look… I could see he was moved by it and stuff. It was quite an experience."

Afterwards, the pope greeted Voight in Italian, probably because the movie had been dubbed in that language for the Italian audience at the screening. Voight doesn't speak Italian.

"You can see he's very warm and everything. I could get the words he was talking about. Very sweet."

As for Pope John Paul II, Voight said, "I really always thought he was such a man of grace and such a moral force. Good guy. Very good guy."

Syler asked him if he was surprised by anything he learned about the late pontiff while researching the role.

"One thing that everybody said about him was he had a great sense of humor," Voight replied. "They'd tell me this guy was really fun. He was funny. A funny character. And you could see how warm he is, the way he touches people. He loved people.

"And then he was the most recorded person in, perhaps, the history of the world," the actor continued, "because we have all this technology to record people now. He was the focus of all of that. And his pontificate lasted 25 years. I had lots of opportunities to listen to DVDs and take a look."

Voight is still remembered for his role in the 1969 classic "Midnight Cowboy," which brought him his first Oscar nomination, and for his Academy Award-winning portrayal of Luke Martin in "Coming Home."

Most recently, he has been seen in "National Treasure" with Nicolas Cage, and he was featured in "Pearl Harbor" and "Lara Croft: Tomb Raider" (starring his daughter, Angelina Jolie), and has starred in "Mission Impossible," "Varsity Blues," "Enemy of the State," and "Anaconda."

Not many people know that Voight made his Broadway debut in "The Sound of Music" in 1966. He also starred opposite Robert Duvall in the acclaimed revival of Arthur Miller's "A View from the Bridge." He later starred in "A Streetcar Named Desire" at the Ahmanson Theatre in Los Angeles.

On television, Voight starred in Hallmark's "The Five People You Meet in Heaven" and in "Jack & The Beanstalk: The Real Story," a miniseries for CBS. He also starred in "Chernobyl: The Final Warning," "The Last of His Tribe" (which earned him a Cable Ace Award), and in the mini-series "Return to Lonesome Dove." He made his directorial debut with the Showtime cable movie "The Tin Soldier," which won several awards internationally including "Best Children's Film" at the Berlin Film Festival.

Voight's humanitarian efforts include advocacy for the rights of American Indians, and he also has worked on behalf of Vietnam veterans. He is currently active in a continuing effort to airlift children from the contaminated areas of Chernobyl.

At the end of the interview on The Early Show, Syler pointed out that Voight has been seen out and about lately with diva Diana Ross.

"Diana and I are friends," said the actor, with a blush. "We've been friends for a while. And she's the greatest. I mean, Diana Ross is the greatest… She's a good friend of mine. We're not having an affair or anything like that. We're just good buddies.

Exclaimed Voight, "It's the truth! Can you imagine this? You wouldn't even let me -- Nobody will even let me explain."

Syler pleaded time constraints, saying, "They're telling me I've got to go." But she added, "We believe you!"