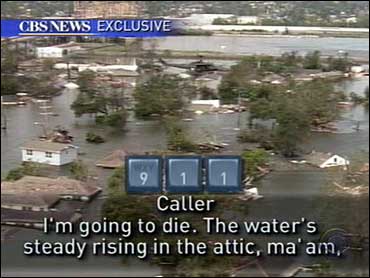 New tapes of emergency calls placed during the first hours of Hurricane Katrina give a horrifying glimpse into the storm. CBS News

Caller: I'm in here with a handicapped girl and I got a baby that is on a pump machine. And he is on a ventilator. He is on the bed and the water is coming up.

911: I need your address to where you they are.

Caller: I can't give you the address because the house has moved.

CBS News Correspondent Byron Pitts reports there is one call that dispatcher Levette Josephs says she will always remember.

Jospehs said she people were holding babies over their head in order to save their lives. Police later discovered the woman and her children drowned.

Operator Mary Knight answered a call from a man trapped in an attic with water up to his chin.

"You can just hear the bubbles as he was trying to talk," Knight said. "You know, because he was just going under."

Listen to audio from the New Orleans 911 tapes.

Also, in New Orleans, the bodies of more than 40 mostly elderly patients were found in a flooded-out hospital in the biggest known cluster of corpses to be discovered after Katrina.

The exact circumstances under which they died were unclear, with at least one hospital official saying Monday that some of the patients had died before the storm, while the others succumbed to causes unrelated to Katrina.

The bodies were found Sunday at the 317-bed Memorial Medical Center, but the exact number was unclear. Bob Johannesen, a spokesman for the state Department of Health and Hospitals, said 45 patients had been found; hospital assistant administrator David Goodson said there were 44, plus three on the grounds.

Goodson said patients died while waiting to be evacuated over the four days after the hurricane hit, as temperatures inside the hospital reached 107 degrees. "I would suggest that that had a lot to do with" the deaths, he said of the heat.

Family members and nurses were "literally standing over the patients, fanning them," he said.

The announcement, which could raise Louisiana's death toll to nearly 280, came as President Bush got his first up-close look at the destruction, and business owners were let back in to assess the damage and begin the slow process of starting over.

But elsewhere, encouraging signs of recovery were all around: Nearly two-thirds of southeastern Louisiana's water treatment plants were up and running. Louis Armstrong New Orleans International Airport planned to open to limited passenger service Tuesday. A plane carrying equipment to rebuild the city's mobile phone networks took off from Sweden. And 41 of 174 permanent pumps were in operation, on pace to help drain this still half-flooded city by Oct. 8.

However, Pitts also reports that late this afternoon a levy in Northeast New Orleans broke flooding some neighborhoods all over again.

In Washington, Federal Emergency Management Agency director Mike Brown announced he was resigning "in the best interest of the agency and best interest of the president." Brown has been vilified for the government's slow and unfocused response to a disaster that is already being called the nation's costliest hurricane ever.

Police Chief Eddie Compass declined to answer any questions, including whether officers received any calls for help from those inside the hospital after it was evacuated.

Dr. Jeffrey Kochan, a Philadelphia radiologist volunteering in New Orleans, said he spoke with members of the team that recovered the bodies from the hospital in the city's Uptown section. He said they told him they found 36 corpses floating on the first floor.

"These guys were just venting. They need to talk," he said. "They're seeing things no human being should have to see."

Mr. Bush, in his third visit to New Orleans since the storm, made his first foray to the streets Monday and toured the city for 45 minutes aboard the back of a truck, forcing him at times to duck to avoid low-hanging electrical wires and branches.

He disputed suggestions that the government responded sluggishly because the victims were mostly poor and black.

Insurance experts have doubled to at least $40 billion their estimate of insured losses caused by Katrina. Risk Management Solutions Inc. put the total economic damage at more than $125 billion.

In New Orleans' central business district — which includes oil and gas companies, hotels, restaurants, banks and brokerages — business owners were issued passes into the city to retrieve vital records or equipment, such as computers.

Among the businessmen allowed back was Terry Cockerham, owner of Service Glass, which installs windows at businesses downtown. He has been working out of his house because his business was destroyed by looters and flooding.

"This is about the most work I've ever had," he said. "We'll work seven days a week until we get this job finished. I don't want to get rich. I just want to get everything back right."

New Orleans Metropolitan Convention & Visitors Bureau president J. Stephen Perry said Katrina cost the city about 100 to 200 major conventions. But he expected the tourism industry to be among the first to bounce back, since the French Quarter and many of the city's hotels suffered little damage.

"The really positive thing long-term is, the core of our infrastructure of the $5 billion to $8 billion tourism industry remained intact," Perry said. "As odd as it may sound right now, we are optimistic that this recovery is not only going to happen, its going to happen well and we're going to have a great city going again."

The discovery at Memorial Medical Center was not the first where workers have recovered a group of bodies from a health care facility.

Saturday, a recovery team found eight bodies inside Bethany Home, an assisted-living center near City Park. On Monday, mortuary workers removed human remains from Lafon Nursing Home of the Holy Family, but authorities would not disclose the exact number of victims.