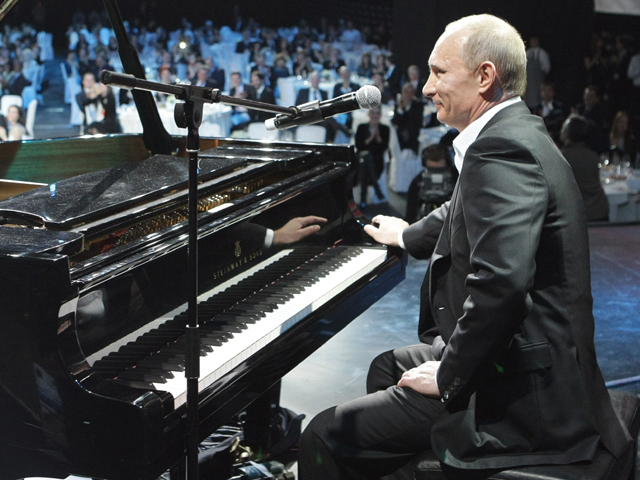 How different would history be if Nikita Khrushchev, during his 1959 visit to the United States, began belting out American pop tunes?

We'll never know, but Vladimir Putin has now done something no other Russian leader is known to have done, at least in public: Croon an American pop classic that's been the thrill of generations of music fans.

The 58-year-old Russian Prime Minister-pilot-hunter-judo black belt added another line to his resume during a charity event in St. Petersburg Friday night, when he sang "Blueberry Hill" to an appreciative audience that realized they had not seen it all.

The U.K. Daily Mail reports that Putin was urged to the stage by the event's host, and modestly admitted, "Like an overwhelming majority of people, I can neither sing nor play, but I very much like doing it."

He proceeded to tickle the ivories on a piano — stumbling a bit on a Soviet-era patriotic song, "From Where the Motherland Begins" — before the band played the introduction to "Blueberry Hill."

Putin stepped up to the microphone and sang.

According to the Mail, Putin's spokesman explained the former KGB head and president learned the song's lyrics as part of his English language studies.

The event was a charity concert for children suffering from eye diseases and cancer. Spotted in the crowd: Goldie Hawn, Kurt Russell, Kevin Costner and Sharon Stone.

Richest women in the world, ranked by net worth
David Morgan