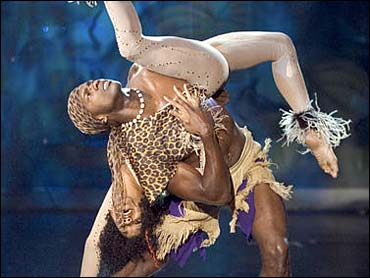 Forty-three members of a Cuban dance troupe performing at a Las Vegas casino asked for asylum in the United States on Monday in the one of the biggest mass defections of entertainers from Cuba.

Members of the troupe said they took the step because they feared they would be forced to quit performing if they returned to Havana. They said Cuban authorities did not want them to perform in the United States in the first place.

The performers arrived by bus at the federal courthouse in Las Vegas, where they submitted the paperwork for asylum.

"They were forced into this," Nicole "N.D" Durr said of the 43 dancers, singers, musicians and stagehands from her "Havana Night Club" show that has been performing in Las Vegas. "We will continue our work."

"Art should have no boundaries," Durr told The Associated Press on Sunday. "My artists stood up in one voice and said they want to go. We want to dance. We want to continue to dance."

Durr said seven additional cast members, who are currently in Germany, also are seeking asylum. They are expected to arrive in the United States within the week. Another three members have decided to return to Cuba, she said.

Durr said the decision to defect was a tough one for the show's performers, with most of their immediate family members remaining in Cuba.

The defection comes as the show is set to return to the Stardust Resort and Casino on the Las Vegas Strip; a performance is planned for Monday night.

"Havana Night Club" performances had been scheduled to begin July 31 at the casino but were delayed after a mass of bureaucratic red tape.

In July, promoters complained that Cuban officials were not backing the group's first planned trip to the United States after 16 other trips to countries including Japan and Germany.

Cuban authorities said later that month they didn't support the effort because they didn't believe the United States would grant visas — especially since it rejected a similar request in February.

But eventually the U.S. government granted the visas, allowing cast members to slowly enter the country and perform from Aug. 21 to Sept. 6, fulfilling only two weeks of a six-week engagement. The troupe also did a short encore engagement last month.

The show, which has toured 17 countries, has never been performed with its full ensemble of cast members.

"We've been together for more than six years," she said. "We are like a family."