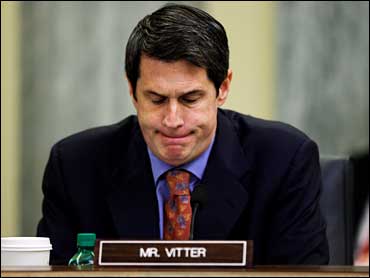 (AP Photo/J. Scott Applewhite)
Louisiana Senator David Vitter (R-LA) announced this afternoon that he will release his hold on the nomination of FEMA head Craig Fugate. Vitter said his reason for initially holding up the Senate's vote was to ensure infrastructure funds were directed to Louisiana, though critics questioned his motives.

"Louisianans have gotten way too many easy spoken assurances from FEMA over the last four years that didn't mean anything. Now that I've secured a specific written commitment from them on the V-Zone issue, we can move forward," Vitter said a press release Tuesday.

Vitter, angered over a dispute with FEMA on its rejection of three construction projects in an area of Louisiana prone to flooding, said he was holding up the nomination until he received answers, the Washington Post reports.

But while Vitter said he was motivated by assurances that his state's flood zones would benefit, some – including Florida Sen. Mel Martinez, a Republican – intimated that his real concern was his re-election in 2010.

"Vitter is playing political games with this appointment," the video's narrator says, "even attempting raise campaign contributions from his delaying tactics."

Update: After the hold was lifted, Fugate was confirmed by the Senate by voice vote on Tuesday night.