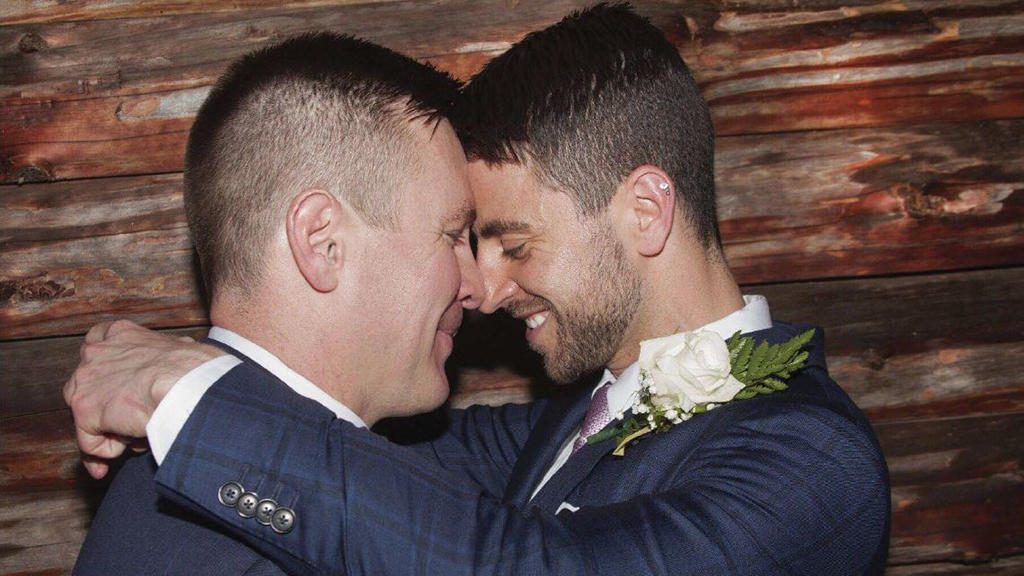 BUTLER COUNTY, Pa. -- A same-sex couple is suing printing company Vistaprint after claiming they opened their wedding programs only to find hate-filled pamphlets instead, CBS Pittsburgh reports. In response, the printing company issued a lengthy statement Thursday saying "how incredibly saddened we are to hear this story" and promising to investigate.

According to a lawsuit, Stephen Heasley, 39, and Andrew Borg, 31, say they ordered 100 wedding programs from Vistaprint.

When they opened the package the night before their Butler County wedding in September, they found flyers with hateful, discriminatory and anti-gay messages equating their relationship to Satan's temptation. Inside the shipment, were approximately 80 copies of a pamphlet entitled "Understanding Temptation: Fight the good fight of the faith."

"Satan entices your flesh with evil desires" and sin is the result of your failure to resist the temptation," the pamphlet read. "It is an act of rebellion against God's holiness."

The couple's lawyer, Michael J. Willemin of the law firm Wigdor LLP., says in the suit, "The pamphlets -- plainly sent to threaten and attack Mr. Heasley and Mr. Borg because they are gay -- warn that 'Satan entices your flesh with evil desires.'"

The couple provided a copy of the wedding programs they ordered, which were blue and gold and included the lyrics to their processional song, "Treasure" by Above and Beyond.

Vistaprint's CEOs Trynka Shineman and Robert Keane posted a statement online in response, saying that the company celebrates diversity and never discriminates against customers based on their sexual orientation. They also said they were disappointed to let a customer down.

"We want to say how incredibly saddened we are to hear this story. To know that any person could be treated in such a way especially during a time that should be filled with joy is extremely disheartening," the statement read. "Imagine a customer who took the time to create something personal to mark this special day and instead, the day before their wedding, goes to open their wedding programs and finds these judgmental messages. We have never been more disappointed to let a customer down."

It continued: "We share in this couple's outrage. Vistaprint in no way condones -- and does not tolerate -- discrimination against any of our customers based on their race, religion, gender or sexual orientation. We have encouraged members of the LGBTQ community to use our services to help celebrate their life events for many years, and have published thousands of wedding invitations, programs and other content for same sex couples."

Vistaprint also outlined three steps it's taking to address the incident, including an investigation.

"We have begun a complete investigation to determine how and why the couple received these materials. If we determine that any Vistaprint employee or partner had any role in this situation, we will take strong action," the statement read.

Vistaprint said it has reached out to the couple so that a line of communication can be established to "use this incident as an opportunity to shine a light on important LGBTQ issues."

The couple is suing for unspecified damages.

They chose Butler County, in western Pennsylvania, for their wedding because Heasley is originally from there. The couple now lives in Australia.

U.S. captives said they "prayed for death" on brutal ride from Ukraine
Thanks for reading CBS NEWS.
Create your free account or log in
for more features.
View CBS News In
CBS News App Open
Chrome Safari Continue
Be the first to know
Get browser notifications for breaking news, live events, and exclusive reporting.