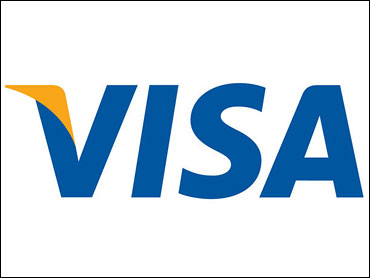 Update: 6 PM ET Visa's website was inaccessible for part of Wednesday following a large-scale attack on MasterCard earlier in the day.

Supporters of WikiLeaks in a loosely tied Internet group called "Operation Payback" are claiming responsibility on their Twitter feed and elsewhere.

As of Wednesday afternoon, MasterCard Inc.'s site was back up. Both companies stopped processing donations to WikiLeaks on Tuesday.

By late Wednesday, Visa said that its processing network, which handles cardholder transactions, was functioning normally and that account data was not at risk. However, the company did allow that its corporate website - Visa.com - continued to experience "heavier than normal traffic."

"The company is taking steps to restore the site to full operations within the next few hours," Visa said.

On Tuesday, Visa suspended all payments to WikiLeaks pending an investigation of the organization's business. That put added pressure on the website's source of funding. The online payment company PayPal, Inc. has has also severed its links with WikiLeaks. On Monday, Swiss authorities closed the new Swiss bank account opened by Wikileaks founder Julian Assange.

Assange was arrested Tuesday in Britain on a Swedish warrant seeking his detention for questioning in a sex-crimes investigation.

Following Assange's arrest, supporters launched retaliatory attacks on MasterCard for terminating its relationship with WikiLeaks. MasterCard says that its website has remained online.